In Pics: Watch the Baron Palace before it opens to visitors 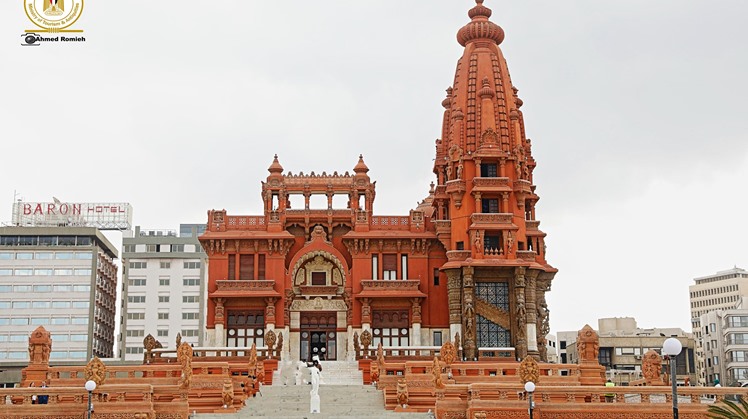 Thu, Feb. 13, 2020
A palace located in the heart of the most prestigious areas of Cairo, the Heliopolis area, as you can see it when you pass through Al-Oruba in Salah Salem, is the Baron Palace, which has a style inspired by Indian architecture, built by the Belgian millionaire Baron Edward Empain "September 20 1852 - 22 July 1929", The Ministry of Antiquities is preparing for the opening of the next few months, after its restoration at a cost of 100 million pounds.

Dr. Khaled Al-Anani, Minister of Tourism and Antiquities, said in previous statements that almost all operations were completed, pointing out that it is the first integrated restoration process for the Baron Palace, at a cost of more than 100 million pounds, of which approximately 15 million are from Belgium and the rest are from the Egyptian state. Al-Anani said that the prices of tickets to enter the palace were determined after its opening, noting that it would be cheap in the beginning until it was adequately promoted.

He pointed out that the tickets will be accessible to all, and will be 100 pounds for the foreigner and 50 for the foreign student, and for the Egyptians 20 pounds and 10 for students, in addition to that all Egyptians over 60 years of visit are free.

The Ministry of Tourism and Antiquities has so far completed 95% of the project for the restoration and rehabilitation of the palace, and Brigadier General Hisham Samir, Assistant Minister of Tourism and Antiquities for Engineering Affairs and General Supervisor of Historic Cairo, has indicated that the restoration work has ended and the team is now finalizing it in addition to carrying out repairs Rehabilitation of the palace, to become an exhibition that narrates the history of the Heliopolis district in cooperation with the Belgian embassy in Cairo and civil society societies in Egypt, by implementing a project to re-employ the palace.

The palace will include a variety of photos, archival documents, illustrations, maps, and addresses for the history of Heliopolis neighborhood (Heliopolis and Al-Mataria) across the different eras, in addition to its most important heritage features, and a variety of pictures, maps, documents and films that tell the history of Heliopolis and the aspects and lifestyle of that special time period .

The restoration of the palace began under the supervision of the Engineering Authority of the Armed Forces, as the structural reinforcement of the palace ceilings was restored, finishing the facades, cleaning and restoring the decorative elements in it, completing the deficiencies of the doors and windows, completing the cleaning and restoration of the marble columns, wooden doors, metal windows, and restoring the decorative iron windows on the main facades and the panel The mural above the main entrance, and marble statues of the public site, indicating that work has begun to raise the efficiency of the public site of the palace and coordinate its garden.