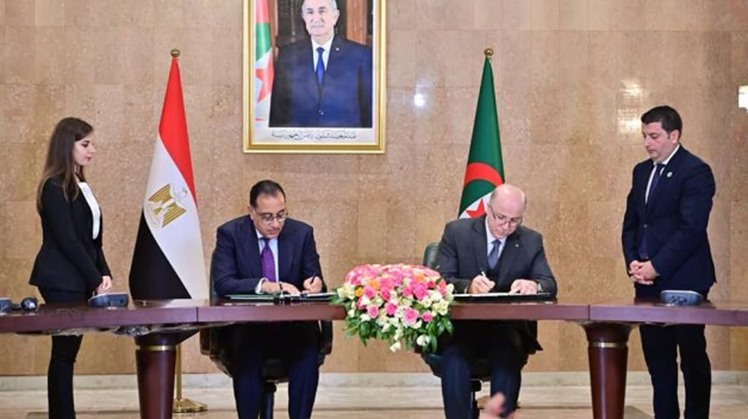 A memorandum of understanding was also signed between the Egyptian and Algerian institutes for diplomatic studies.

Madbouli said on Wednesday it is of the better interest for both Egypt and Algeria to achieve integration in order to set up a joint productive and industrial base serving the region.

He expressed confidence that both countries are capable of achieving such an integration as they both possess human and material potentials.

Madbouli made the remarks after the end of the 8th session of Egyptian-Algerian higher committee meetings.

He conveyed President Abdel Fattah El Sisi's greeting to the Algerian government and people over the 60th anniversary of the country's Independence Day.

He expressed happiness over the convocation of the higher committee that last convened in 2014, saying this session reflects true desire by both countries to boost relations in light of the major challenges facing the world at the time being.

Talking about the signing of many documents between the two countries, Madbouli cited his Algerian counterpart Aymen Benabderrahmane's remarks in which he underlined the importance of setting a timetable to put into effect the reached memos and agreements to further cooperation.

He said the Egyptian-Algerian business forum on Thursday will help put into effect many joint projects by the end of 2022, adding that governments have a major role in encouraging the private sector to engage in many joint ventures.

The Algerian premier said the governments of Egypt and Algeria have to work for implementing presidential directives that were made during January summit to enhance bilateral cooperation.

Madbouli and Benabderrahmane signed the minutes of the eighth session of Egyptian-Algerian higher committee meetings.

Benabderrahmane asserted the importance of intensifying cooperation with Egypt to face economic challenges.

He said holding the 8th session of the Egyptian-Algerian higher committee after an 8-year hiatus comes as part of efforts to implement the directives of Algerian President Abdelmadjid Tebboune and Sisi during their summit in Cairo on January 24-25 where they expressed their keenness on boosting ties between both countries and promoting cooperation.

He said the current session provides a chance to mull the best ways to develop bilateral relations.

He said Egypt and Algeria have a lot of achievements in different domains including energy, trade and investment, adding that this made Egypt the second trade partner to Algeria and the third partner in the field of investments.

There are 25 Egyptian projects in Algeria in the sector of petrochemicals, communications, electric cables, construction and agricultural services.

He lauded the Egyptian-Algerian businessmen council and efforts to deepen cooperation between the chambers of commerce and industry of both countries.

Madbouli for his part said the private sector should play a greater role in boosting Egyptian-Algerian trade and investment cooperation, especially under the exceptionally difficult circumstances the world is witnessing.

These conditions make it incumbent upon all of us to unite, cooperate, and work hard for achieving integration, Madbouli added.

He further stressed that the committee should convene on a regular basis, especially in light of the great importance Sisi and Tebboune give to fostering cooperation between the sisterly Arab nations.

Asserting his total agreement with Madbouli's integration-related point, the Algerian premier stressed the need to launch a regular maritime line between Egypt and Algeria, and work for promoting food, energy, and pharmaceutical cooperation.

Benabderrahmane also invited Egyptian investors to do business in Algeria where they will be greatly welcomed and provided with all needed facilitations.

Madbouli said the current volume of trade exchange between Egypt and Algeria does not match the two countries’ production and export potential or market needs; neither is it consistent with the bilateral or multilateral agreements in force.

He noted that the situation in Libya should not be a stumbling block, adding that an agreement had recently been reached with Tunisia to launch a regular maritime line that can be extended to the ports of Algeria.

Thanking the Algerian government for removing a ban on some exchanged products, Madbouli said Egypt looks forward to a similar decision to do away with non-tariff restrictions and streamline procedures at Algerian ports.

Madbouli also congratulated the Algerian government on the issuance of a new investment law before which local and foreign investors are equal, and which stimulates capital flows to build a modern Algeria.

Madbouli re-invited the Algerian side to the 27th session of the Conference of the Parties (COP27) to the UNFCCC, to take place in Sharm El-Sheikh in November.