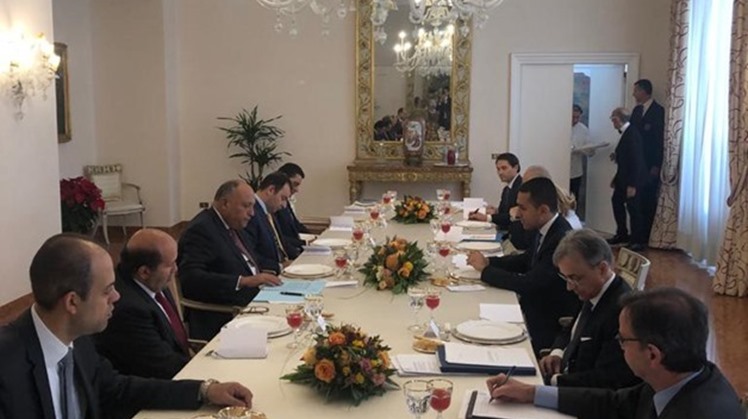 Sun, Dec. 22, 2019
CAIRO – 22 December 2019: Egyptian Foreign Minister Sameh Shoukry discussed with his Italian counterpart on Thursday the dangers posed by the escalation in Libya as a result of the highly criticized MoUs signed and activated between Ankara and Tripoli’s government.

In a phone call between Egyptian Foreign Minister Sameh Shoukry and Di Maio, they discussed the developments in Libya and reviewed ways to boost efforts to restore security and stability in the war-torn country, Egyptian foreign ministry spokesman Ahmed Hafez said in a statement.

They discussed the recent MoUs as they represent a violation to the Skhirat agreement signed in 2015 and thwart efforts to reach a comprehensive settlement to crisis in Libya.

Shoukry and Di Maio also agreed to work to encourage the Libyan parties to engage immediately and fully cooperate with the UN envoy.

Egypt has earlier condemned the signing of the two memoranda of understanding on security and maritime jurisdictions by Turkey and Libya shortly after the signing was announced.

“Egypt affirms that such memoranda possess no legal effect, as they cannot be recognized in light of the fact that Article 8 of the Skhirat Political Agreement on Libya, widely accepted by Libyans, defines the competences conferred to the Council of Ministers, expressly stipulating that the Council of Ministers as an entity – and not the president of the council alone – has the power to conclude international agreements,” Hafez said in a separate statement.

“It is well-known that the Council of Ministers’ membership is clearly incomplete, and that it currently suffers from a serious imbalance in the representation of the Libyan areas. Accordingly, the restricted role of the prime minister is limited to managing the council’s affairs. All attempts to build legal arrangements with any other country comprise a serious breach of the Skhirat Agreement.

The MoUs have no implications on the rights of the riparian states of the Mediterranean Sea, and do not affect the maritime boundary delimitation system in the Eastern Mediterranean region,” Hafez continued.

Egypt called upon the international community to face this "negative approach," which coincides with Germany’s efforts to reach a comprehensive peaceful solution for the conflicting parties of Libya.