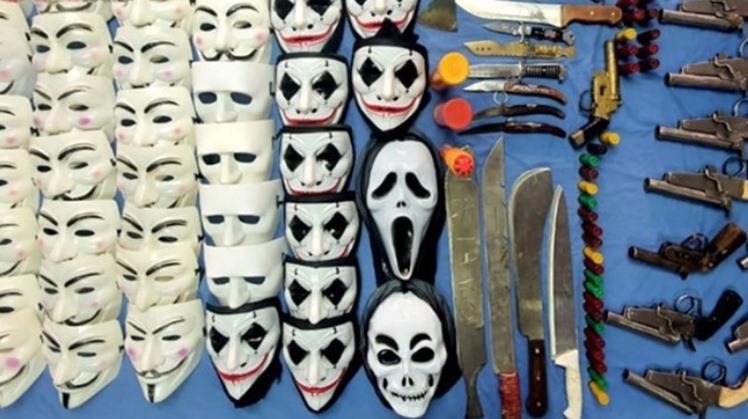 Thu, Jan. 23, 2020
CAIRO – 23 January 2020: The Egyptian Interior Ministry said it managed on Wednesday to thwart a scheme to harm national security as the anniversary of the January revolution in 2011 looms, saying the schemes were directed by Muslim Brotherhood figures in Turkey.

The arrested suspects, who the ministry say they are part of the outlawed Muslim Brotherhood group, have admitted committing terror-related crimes, which have been recorded by the ministry.

Mohamed Aboul Fotouh, a suspect in the case, said that he got huge sums of money from a terrorist fugitive in Turkey, and that she asked him to start a company, work to collect money, and that he made big profits. “She asked me to deliver (the money) to a group of people who I had been meeting in many places, with nicknames and secret numbers … to execute the duties they are tasked with from Turkey.”

Ahmed Ali Abu Dhaif, another suspect over involvement in targeting the national security on January 25th, said he is a member of the media committee of the Muslim Brotherhood group, adding that he was assigned to organize anti-state propaganda before the ninth anniversary.

“We were entrusted with having TV interviews with citizens in the street under the names of other channels to gain the trust of citizens,” Abu Dhaif said, adding that he was sending the footage to Turkey to be edited, in a way that removes the positive events and only focus on the negative things in the country1.

Mohamed Abdel Monsef, also a member of the Muslim Brotherhood group, said he is part of the terrorist Hasm group and that he took part in many terrorist attacks in Egypt’s northern governorate of Beheira. He admitted shooting at policemen.

“Instructions have been issued to us from Turkey to carry out sabotage acts during the next period – individual incidents to disturb security and cause fear among citizens before January 25,” Abdel Monsef added.

"I am one of the cadres of the decisive movement and one of the movement's implementation groups, and I participated in a number of incidents, including an operation in the Mohamed Zaki field," said Brotherhood Mohamed Ibrahim Yassin, who was arrested as part of a terrorist cell that planned to target the country during the coming January 25.

Mohamed Ebrahim Yassin said he was responsible for renting flats to store weapons and explosives, and handing these weapons to the Muslim Brotherhood members to carry out their planned sabotage acts.

The scheme included spreading anger and discord among citizens by promoting and broadcasting fake news and rumors via news outlets and social media platforms, including Facebook and Telegram, to polarize infuriated supporters of the terrorist organization and people who are being fed with the dramatic amount of fake news and information.

A number of these calls were launched by groups and pages with the titles The Popular Movement and The Joker, which also publish fake interviews regarding the internal affairs of the Egyptian state.

This is in addition to assigning the terrorist Hasm Movement of planning and preparing a series of terrorist operations to target vital figures, buildings and worshiping houses during the January 25 anniversary.

Providing the necessary financial support to prepare the equipment, weapons and tools required for the terrorist scheme through the development of several methods for smuggling money from abroad through commercial companies that are being used as a front for the organization's activity.