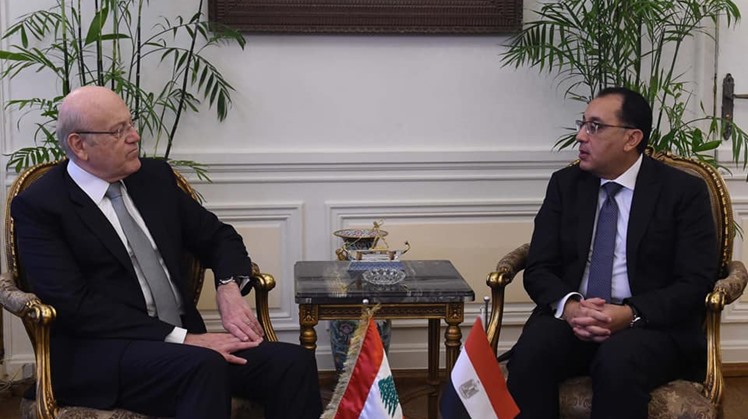 Egypt will remain supportive to Lebanon, Madbouli said, as he met with Mikati in Cairo, the Egyptian Cabinet said in a statement.

Mikati held a meeting on Thursday with President Sisi.

During the meeting, Sisi affirmed Egypt’s keenness to achieve the Lebanese interests and spare Lebanon from the dangers posed by the region’s conflicts.

This comes as part of Egypt’s keenness to help the Lebanese state’s capability and strength as well as people’s wealth and national fabric, Sisi said.

For his part, Mikati hailed Egypt’s continued and sincere efforts to mobilize international support to Lebanon on all levels in light of the hard challenges faced by the Lebanese people, especially at the political and economic levels.

He hailed Egypt’s role as a main pillar to preserve stability in Lebanon and the Arab region.

Sisi welcomed Mikati in Egypt, affirming appreciation of the deep relations between the two countries on the popular and official levels.

Earlier this month, Mikati hailed Egypt’s continuous support to his country during its critical times and hardships.

Speaking to MENA, Mikati said he planned for visiting Egypt soon, noting that he was updated with the development projects in Egypt, orchestrated by Sisi, which made a genuine and inspired progress in few years.

He said that Lebanon would never forget that despite running challenges, Egypt was the first countries, which dispatched food stuff and aid planes to Lebanon after the 2020 Beirut massive explosion, in addition to its assistance amid the coronavirus crisis.