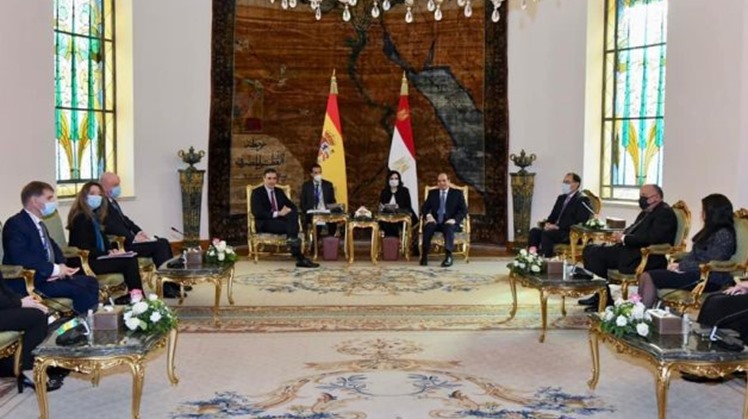 President Sisi and the Spanish prime minister agreed to form a joint ministerial committee that would convene periodically to achieve that goal. That is in addition to the Egyptian-Spanish Business Council, which is holding meetings on the sidelines of Sanchez's visit.

Further, both parties lauded the growth of bilateral relations since President Sisi's visit to Spain in 2015, as indicated by the presidency's press statement. Yet, Egypt aims for expanding cooperation in the sectors of infrastructure, energy, water treatment, tourism, transportation, and healthcare, particularly is the fields of plasma donation and vaccine production. It is noted that Spain had donated four million doses of anti-COVID-19 vaccine to Egypt earlier.

Sanchez commended Egyptian efforts in the realm of maintaining security and stability in the Middle East and the Mediterranean. That is in addition to Egypt's vital role in combating illegal migration through the Mediterranean, terrorism, and extremism as well as promoting tolerance, coexistence, and respect of religious freedom. Hence, that makes the role of Egypt pivotal in supporting relations between Europe on one hand, and the Arab World, Africa, and southern the Mediterranean on the other hand.

In turn, President Sisi displayed the developmental endeavors undertaken by the government inviting Spanish entities to take part in the relevant initiatives and programs as well as mega projects. On his side, the Spanish prime minister said his country is ready to transfer experience and technology to Egypt raising its investments and localizing industries. He pointed out that such orientation stems from Egyptian economy's ability to withstand impact of COVID-19 achieving positive growth.

The talks equally covered repercussions of illegal migration affirming the necessity of dealing with the issue through a comprehensive approach that tackles the political, economic, and social circumstances that incurred its rise over the past period.

Both parties congrued that international efforts must be concerted to achieve settlements to ongoing crises in the region. President Sisi noted that no single case of illegal migration from Egyptian shores has been recorded since 2016 underlining that the country hosts millions of migrants. In previous statements, the president clarified that Egypt has around six million migrants, including half a million Syrians while the rest are from fellow African states.

The president and the Spanish prime minister concluded their talk on that front with discussing developments in Libya so as Sanchez praised Egypt's way of dealing with the crisis as it tackles all dimensions. He also affirmed Spain's keenness on continuing intensive cooperation and coordination with Egypt over the issue until a comprehensive political settlement is achieved.