Shoukry: Egypt attaches great importance to the exit of mercenaries from Libya' 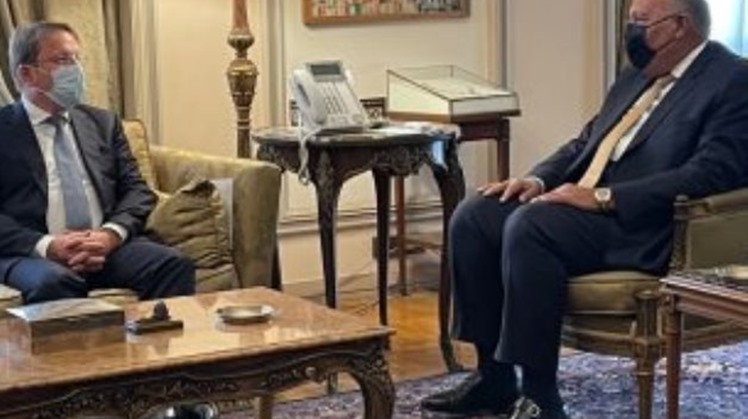 Sat, Oct. 30, 2021
CAIRO - 30 October 2021: Egypt's Foreign Minister Sameh Shoukry affirmed that Egypt attaches great importance to the exit of all foreign forces and mercenaries from Libya, repeating his warning of the threat posed by their continued presence to the country’s sovereignty and national unity and the security and stability of its neighboring countries and the region at large.


This came during a session of talks he held on Saturday with United Nations Special Envoy for Libya Ján Kubiš on the latest developments in the north African Arab country.

The meeting took up as well Egypt’s non-stop efforts to move forward on the various tracks of the Libyan file to realize an all-out political settlement for its decade-long crisis, according to Foreign Ministry spokesman Ahmed Hafez.

“All forms of foreign existence on Libyan territories must be brought to an end,” Shoukry said, noting that “no exceptions should be allowed”.

He also called for taking “stricter action against all parties violating an international arms embargo on Libya”.

Talks between the two sides tackled holding the Libyan parliamentary and presidential elections on time on December 24 in accordance with a Libyan political roadmap and relevant UN resolutions, the spokesman said, noting that Shoukry cautioned of the serious implications of failing to deliver on political commitments and their negative impact on Libya’s security and stability.

For his part, the UN envoy posted Shoukry on the outcome of his recent contacts with all the parties concerned with the Libyan situation and expressed his appreciation of Egypt’s efforts to consolidate the country’s stability and support the legitimate aspirations of its people.

Earlier in October; while attending the international conference Libya to support stability on its territories, Shokry proposed four measures that can be approved by participants to ensure elections are held on time in December.

First: Designating the tools of the implementation and observation of the withdrawal of foreign forces, mercenaries, and foreign militants within a clear time frame.

Second: Implementing all the articles of the ceasefire agreement, including freezing all military agreements.

Third: Setting suitable programmes for the disarmament of members of armed groups, and the rehabilitation of those who can be reintegrated in society.

Fourth: The international community has to assume its role in ensuring that parties, that want to abandon its commitments and go around international resolutions pertinent to holding elections and the withdrawal of foreign forces and mercenaries, are assuming their responsibilities, and are held accountable if they do not.

At the beginning of his speech, the minister valued the measures taken by the Libyan Presidential Council and the Government of National Unity in preparation for December elections.

Shokry added he looks forward to the absence of any exclusion or marginalization in the elections for Libya to restore its effective Arab and African role.

The minister noted that Egypt has been working on creating a common ground among various Libyan factions so they would reach a joint national integrated vision aimed at resolving the causes of the political, economic, and security crises the country has been enduring since 2011.