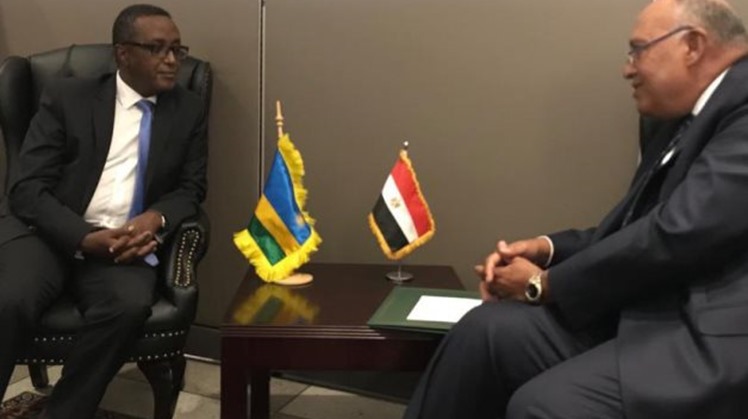 Tue, Sep. 21, 2021
CAIRO – 21 September 2021: Egypt’s foreign minister Sameh Shoukry meets, on Tuesday, with his Indian counterpart Subrahmanyam Jaishankar, on the sidelines of the 76th session of the UN General Assembly (UNGA 76) as they discussed several issues of mutual concern according to spokesperson Ahmed Hafez.

On the sidelines of the #UNGA meetings, FM #Sameh_Shoukry meets with Pakistani FM #Shah_Mahmood_Qureshi to discuss ways of advancing bilateral relations in various fields, as well as discussing international issues of common interest.
🇪🇬🤝 🇵🇰@SMQureshiPTI@ForeignOfficePK pic.twitter.com/go08PCShDj

On Monday Shoukry held series of meeting with his counterparts of different countries including Albania, Sweden, and Cyprus, besides the Secretary-General of the Union for the Mediterranean and President of the Libyan Presidential Council.

Sameh Shoukry met with Albanian counterpart Olta Xhaçka, discussing ways to advance cooperation between both countries. Both ministers discussed the cooperation efforts, said Ahmed Hafez, the Spokesperson of the Egyptian Foreign Minister Ahmed Hafez in a statement on Twitter.

Shoukry also congratulated Albania for being elected a non-permanent member of UNSC 2022-2023.

In another meeting, he met with Secretary-General of the Union for the Mediterranean Ambassador Nasser Kamel, in the framework of Egypt's appreciation of the UfM role in promoting cooperation across the Mediterranean.

In a different meeting with his Cypriot counterpart Nikos Christodoulides, Shoukry discussed the bilateral “strong” relations between both countries.

The Egyptian Foreign Minister also met with President of the Libyan Presidential Council Mohamed Al-Menfi on Monday, discussing the developments in the Libyan situation.

This came as they met in New York to discuss building on the progress the bilateral relations between Egypt and Libya have witnessed, Hafez said.

Shoukry has arrived in New York to take part in the 76th session of the United Nations General Assembly (UNGA).