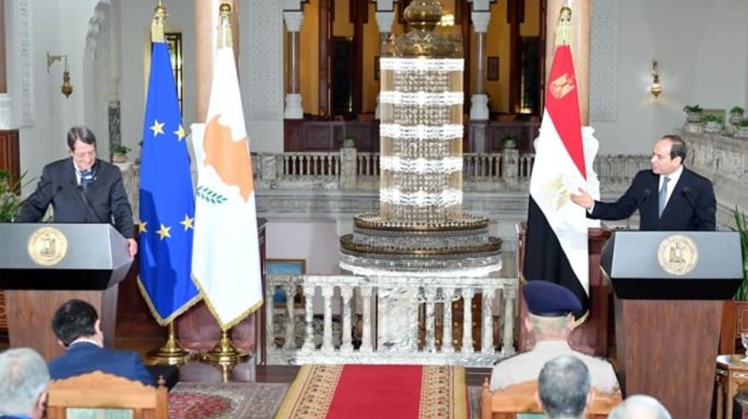 After the Supreme Egyptian-Cypriot Government Committee convened, this time at the presidential level, President Abdel Fattah el-Sisi said in a press conference that over the past few years, political, economic, and military ties have developed in a model to be followed in the region to achieve integration.

“The strategic partnership we have established in the Eastern Mediterranean requires constant coordination to achieve regional stability and commitment to exchanged support on all issues with common interest,” Sisi said.

Sisi and his Cypriot counterpart Nicos Anastasiades said cooperation will be intensified politically, economically, commercially, agriculturally and in the tourism sector.

The Supreme Committee will remain to be an important venue for regular consultations on regional issues, Sisi added, while Anastasiades said regular correspondence between the two states’ ministers of energy, agriculture, education, and maritime transport helped develop ideas and open horizons of cooperation.

Based on agreement on renewable energy, the two presidents agreed on exchange of expertise on green hydrogen and full usage of solar energy and thermal energy, Anastasiades added.

In trade, business forums will be held regularly especially in the fields of drugs and fisheries, and in education, a memorandum of understanding on higher education and scientific research will be signed.

Anastasiades emphasized that his vision on Libya is identical to Sisi’s, highlighting the elections should be held in Libya and that foreign forces should be removed from the country. He further praised Egypt’s role in ensuring stability in the region and its mediation between Israel and Palestine.

ٍSisi called for international efforts to support Gaza after the latest Israeli aggression and bringing the Palestinians and the Israelis back to the negotation table leading to a Palestinian state.

As Anastasiades updated Sisi with the latest developments of his country's issues with Turkey, Sisi told the Cyrpiot president of Egypt's efforts to arrive at a fair solution for the Grand Ethiopian Renaissance Dam and to resume negotiations leading to a legally binding agreement on the filling and operation of the structure. He said the international community has a serious role to play in the issue to maintain the stability of that part of Africa.

Anastasiades said he updated Sisi on “negative developments” in talks with Turkey that deviated from UN resolutions. He added that Turkey wants a two-state solution and to change the administration in Ammochostos, which is occupied by Turkey.

He thanked Sisi for Egypt’s unwavering position regarding the Cypriot issue in accordance with the UN resolutions and for opposing illegal Turkish actions, especially encroachments on Cypriot economic waters.

For his part, Sisi said Egypt’s stance on the Cypriot issue is based on the international law and the Charter of the United Nations, namely non-interference in internal affairs, respect for the sovereignty of territorial waters, and sovereign rights of countries in the region regarding natural gas exploration and hydrocarbon resources in their waters in accordance with the relevant maritime delimitation agreements.

The Egyptian president expressed solidarity with Cyprus regarding attempts to impose a “new fait accompli” in violation of security council resolutions.

In April and May, Turkey approached Egypt to discuss ways to improve relations after eight years of vocal criticism and severed diplomatic ties. Egypt had already taken significant steps in solidifying ties with Cyprus and Greece, which both have major disagreements with Turkey.

Egypt cautiously agreed to engage in talks with Turkey, and for some time there seemed to be progress as hostile Arabic-speaking T.V. channels broadcasting from Turkey toned down their opposition to a great extent. Egypt's requests wereTurkey-allied mercenaries beremoved of Libya, a neighbor of Egypt, and that Muslim Brotherhood members who reside in Turkey be returned to Egypt for trial.

In July, reports indicated that the talks were not moving forward, and no further meetings were set between Egyptian and Turkish officials.

The Cypriot president called the summit historic. He vowed that the two countries will strengthen economic and political ties bilaterally and trilaterally with Greece, as well as with other countries in the area that “are not hostile” to their neighbors.

At the European Level, in which Cyrpus in a member, Anastasiades said his country insists on a partnership agreement between the EU and Egypt.

“We believe Egypt is one of the most important and one of the largest partners of the EU in the Middle East and Africa, and it is a cornerstone for stability and peace in the Middle East. It also has an active role in combating illegal immigration and terrorism,” Anastasiades said.

He said work to establish pipeline under the Mediterranean Sea to transfer natural gas to Europe as well as establish the Euroafrica Interconnector, which will link the power grids of Egypt, Cyprus, and Greece, will be expedited. The specialized committees will convene on Sept. 15 to turn the projects into a reality. Also in September, a memorandum of understanding will be signed by Cyprus and Egypt on electric linkage and another tripartite MoU including Greece on the same project.