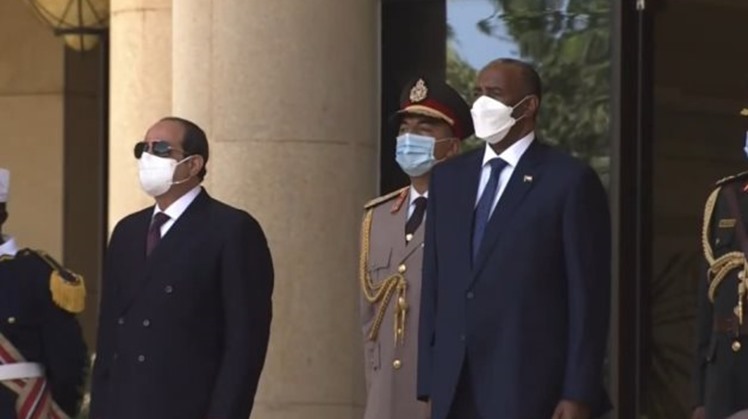 Mid-December 2020, the United States removed Sudan from the list of the countries sponsoring terrorism after it was backlisted in 1993 due to “supporting a terrorist group like al-Qaeda, harboring its leader late Osama bin Laden, and involving in terrorist attacks against the US embassies in Tanzania and Kenya in 1998.

Sisi and Burhan have held a bilateral meeting in Khartoum where they discussed the latest developments in some regional issues, particularly the controversial Grand Ethiopian Renaissance Dam (GERD) file, security in the Red Sea and the situation on Sudan's borders, on Saturday.

The visit comes in light of consolidating Egypt's efforts to support Sudan in this critical stage, and of keenness on joint coordination and unification of visions on various issues of common interest, Egyptian Presidency Spokesperson Bassam Radi said in a statement.

President Sisi is accompanied by Egyptian Foreign Minister Sameh Shoukry and Chief of the Egyptian Intelligence Abbas Kamel in his one-day visit.

Egypt and Sudan have voiced their concern about the possible harms and threats of the controversial Ethiopian Renaissance dam and how the dam will negatively after their water share of the Nile in case Ethiopia abstained from signing a binding and legal agreement on the dam operation and filling its reservoir.

Failure of reaching a binding agreement on filling and operating the dam and the refusal of providing data from the Ethiopian side will significantly negatively affect the operation of the Sudanese Roseires reservoir, said Manager of Roseires reservoir Hamed Mohamed Ali on last week.

In remarks to the Sudanese News Agency (SUNA), Ali said that the Sudanese Roseires dam will depend on the quantities of the river coming from the Renaissance Dam, and thus the absence of a binding and satisfactory agreement for all parties will constitute a great danger.

Sudan’s Roseires dam, which is located near the Sudanese border with Ethiopia, has productive and economic importance in irrigating agricultural projects along the Blue Nile and the Nile, and producing electricity, he added.

This comes while Ethiopia has frequently affirmed it would implement the second filling of the Grand Ethiopian Renaissance Dam next July under any circumstances.

Egyptian Minister of Water Resources and Irrigation Mohamed Abdel-Atti said that Sudan worried because of what happened last year when Ethiopia began filling the dam reservoir without notifying Sudan, adding that Sudan was negatively affected.

As Democratic Congo is chairing the AU for the year 2021, it is attempting to revive stalling negotiations between Egypt, Sudan, and Ethiopia. However, few hours before Sisi’s official visit to Sudan, Ethoipian Minister of Water, Irrigation and Energy Seleshi Bekele said on Thursday that his country is looking forward to a “win-win solution” for the Grand Ethiopian Renaissance Dam through trilateral negotiation.

Bekele’s remarks came after he hosted a delegation from the Democratic Republic of Congo to discuss the ongoing negotiations with Egypt and Sudan to reach a deal on GERD.