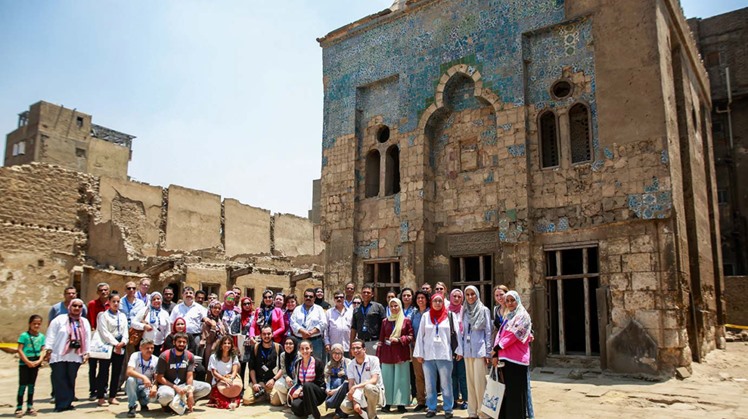 Wed, Nov. 20, 2019
The U.S. Ambassadors Fund for Cultural Preservation (AFCP) supports the preservation of cultural sites, cultural objects, and forms of traditional cultural expression in more than 100 developing countries around the world. Cultural heritage endures as a reminder of the contributions and historical experiences of humanity. By taking a leading role in efforts to preserve cultural heritage, the U.S. shows its respect for other cultures.

Egyptian cultural heritage has been a priority to the AFCP since the inauguration of the program for its rich history and unique heritage sites.

AFCP-supported projects include the restoration of ancient and historic buildings, assessment and conservation of rare manuscripts and museum collections, preservation and protection of important archaeological sites, and the documentation of vanishing traditional craft techniques and indigenous languages. In Egypt, AFCP has supported esteemed local partners on a variety of projects aiming at safeguarding Egyptian tangible and intangible heritage.

In 2003, the AFCP assisted in training officials from the Supreme Council of Antiquities on the use of new technology to help discover new archeological sites. In 2005, the AFCP funded an emergency stabilization project to restore and preserve the 14th-Century Mosque of Aslam Al Silahdar. In 2007, the focus of the fund in Egypt shifted to the documentation of the music of the Hababda and Bashariya tribes in the Halayeb and Shalatin tribes on the Red Sea. In 2009/2010, the AFCP funded the restoration of the historic 19th century Villa Castagli in downtown Cairo. In 2012/2013, AFCP projects have supported preservation of the Greco-Roman civilization in Karanis, Fayoum. In 2015, the grant supported the Conservation of the Mausoleum of Imam al-Shafi’I in Old Cairo.

Museums, Ministries of Culture and Antiquities, and other qualified entities are welcome to apply during the AFCP call for proposals, held annually in December/January.


The U.S. Embassy in Cairo is accepting proposals for preserving Egypt’s priceless heritage through the Ambassadors Fund for Cultural Preservation (AFCP). AFCP has funded preservation of museum collections, cultural practice, and heritage sites that spans Egypt’s history. Click here for information about small-grant application requirements and guidelines and here for the large-grant requirements and guidelines. Please contact us at [email protected] with your proposals. Deadline to submit proposals is December 5, 2019.

Article originally published on the official website of the US. Embassy in Cairo