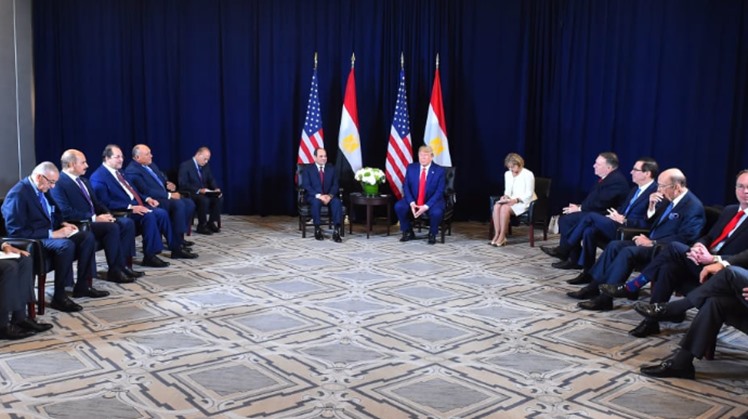 Tue, Sep. 24, 2019
CAIRO – 24 September 2019: Egyptian President Abdel Fatah al Sisi met with his US counterpart Donald Trump Monday on the sidelines of the 74th session of the UN General Assembly (UNGA 47) being held in New York.

According to presidential spokesman Bassam Rady, Trump said his administration seeks to boost cooperation, coordination and strategic consultation with Cairo in the coming period in light of Egypt's pivotal role in the Middle East.

Sisi asserted that Egypt is keen to promote and cement the partnership relations with Washington, pointing out to the importance of this partnership in boosting peace and stability in the region.

Egypt looks forward to more coordination and consultation with the US in all regional issues, Sisi said.

Trump hailed Egypt's successful counter-terror efforts, asserting that Egypt is a key partner in the fight against terrorism, said the presidential spokesman. Sisi, for his part, underlined the importance of continuing cooperation between Cairo and Washington to combat terrorist organizations.

The meeting between Sisi and Trump tackled also economic cooperation.

US President Donald Trump told the reporters that it is “an honour to be with my friend the president of Egypt” as he started the meeting with the Egyptian President Sisi.

“He is a real leader, he has done some things that are absolutely amazing in a short period of time when he took over not so long ago, it was in turmoil, then it is not in turmoil anymore,” said Trump while addressing the reports covering the meeting.

“We are doing a lot of trading, a lot of business, we are talking about many different locations like Libya, I think Libya might be a subject that we are going to be discussing,” added Trump.

The Egyptian President expressed his gratitude to his American counterpart and addressed the fact that they are having their second meeting in two months, which reflects the great relations between Egypt and the US.

Sisi was keen to praise Trump’s “wisdom” in dealing with the regional challenges using the military option.

When asked about relations with China, Trump said that American economy is way upper than the Chinese one, adding that in case his opponent in 2016 elections has won the presidential race the Chinese economy would have “surpassed” the United States.

“With me, there is a tremendous difference, we are way number one and China is number two,” said Trump.

Trump said that Egypt is a “special place” with its largest population in the Arab world. The American president said that his wife has been to Egypt and was “treated” so nicely, adding that the first lady loved Egypt’s pyramids.

“The pictures were something she’ll never forget,” said Trump about his wife’s visit to Egypt in October 2018.

Egyptian President Abdel Fatah al Sisi said that the political Islamic groups will always hinder the existence of stability in the region.

Sisi asserted that the public audience in Egypt will never accept to be ruled by political Islamic groups, adding that this fact was clearly demonstrated in 2013 when the Egyptian masses took to the street and ousted the late President Mohamed Morsi who was a member of the outlawed Muslim Brotherhood group.

On the other hand, US president asserted that his country does not need a mediator to negotiate with Iran, in reference to the French president’s movement to organize a meeting between Trump and the Iranian President Hassan Rouhani.