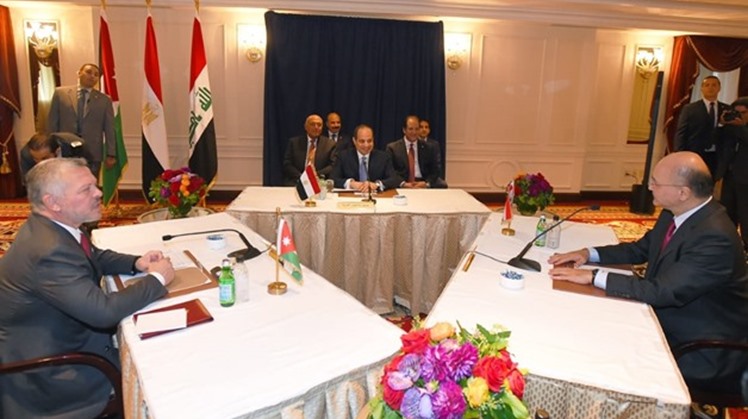 Mon, Sep. 23, 2019
CAIRO - 23 September 2019: Egypt, Jordan and Iraq held a a tripartite summit on Sunday, September 22, on the sidelines of the current United Nations General Assembly meetings in New York.

According to MENA, the three leaders mulled the tripartite cooperation that was launched on March 24, by evaluating the regional meetings during the past six months. The three leaders discussed means to boost strategic, economic and political cooperation between their nations.

They prioritized the cooperation in investment, trade, housing and infrastructure projects. the news agency added.

The meeting has also discussed the latest challenges in the region and means to face them.

The three leaders asserted their full support for the Palestinian cause as a central cause in the Arab world, adding the Palestinian people must have all their legitimate rights that include an independent state and its capital is Jerusalem city in the light of the Arabian initiative and the international agreements.

The leaders said that a resolution is the only way to realize the peace that might be curbed by actions such as building new Israeli settlements as per a unilateral decision.

The meeting urged all the regional powers to take advantage of the latest defeat suffered by the terrorist groups in the region by facing the states and entities that fund and support terrorists in the region.

The leaders expressed their full support for the Iraqi efforts to rebuild the state and help the displaced citizens from the lands that were once captured by the defeated terrorist group of ISIS.

The leaders called for a political solution for the current regional crises in Syria, Libya, and Yemen as per the Security Council’s decisions to preserve the unity of the Arab lands and the regional National Security.

The leaders were keen to condemn the latest drone attack on oil facilities owned by the Saudi giant energy firm Aramco, asserting the importance of the Arab Gulf security as an essential component of the region’s security.