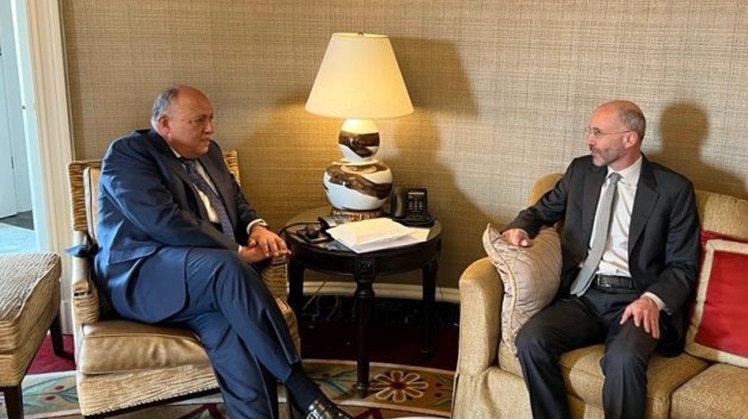 During the meeting, Shoukry and Malley discussed the situations in the Middle East region, the Egyptian Ministry of Foreign Affairs said in a statement.

Shoukry also met on Wednesday in Washington with US Secretary of State Antony Blinken, where they discuss regional and strategic relations between the two countries.

The meeting also affirmed the importance of continued political consultation and coordination on issues of common concern, the ministry added.

Shoukry headed on Monday to Washington in an official visit to discuss with the US officials the regional and international issues of mutual concern.

Shoukry’s visit to the US comes “within the framework of intensifying communication and coordination between the two friendly countries,” the ministry said.

This is in addition to “continuing to strengthen all frameworks of distinguished strategic relations between them and exchanging visions on the most prominent regional and international issues of common concern,” the ministry added.

On Tuesday, Shoukry met with representatives of the US Chamber of Commerce in Washington so as the roundtable discussion took place tackling five areas of joint interest.

Those are bilateral economic and trade relations between the two countries; developmental leap happening in Egypt; participation of US companies in sustainable development efforts deployed by Egypt, particularly in the sector of clean and renewable energy; Egypt's vision on 2022 UN Climate Change Conference (COP27) it is hosting in November; and, the salient role of the private sector in countering climate change.

Shoukry held two other meetings Tuesday, including one with Ambassador David Thorne, senior advisor to the US Special Presidential Envoy for Climate while the other was a roundtable at the Middle East Institute in Washington.

The talk covered Egypt’s strategic ties with the US, Egypt's perception of regional issues and challenges, and Egypt's role on the regional and international levels.

Shoukry visited Washington last November, during which he participated along with Blinken in the strategic dialogue between Egypt and the US, the first since 2015.

During the dialogue session, Shoukry highlighted special relations between the two countries at all levels, calling for continuing work to enhance bilateral cooperation frameworks.

The Egyptian minister highlighted the importance of ongoing strategic partnership with the US and the role played by Egyptian-US cooperation to enhance the state’s capabilities to face challenges.

This includes cooperation in combating terrorism and extremist ideology and in supporting Egypt’s relentless efforts to achieve development to the Egyptian people, Shoukry said.

Shoukry also underscored Egypt’s pioneering role as a pillar for stability in the region, affirming the importance of ongoing cooperation with the US to achieve regional security and stability.

During the session, Shoukry also reviewed Egypt’s unwavering efforts to secure the pillars of decent life to Egyptian citizens and to enhance their civilian, political, economic, and social rights, taking into consideration each country’s culture.

He referred to the issuance of the national strategy for human rights in Egypt, which comes as a result of comprehensive social dialogue with the participation of civil society parties.