Egypt, US enjoy a high level of coordination at the political level, including the situation in Gaza: Shoukry 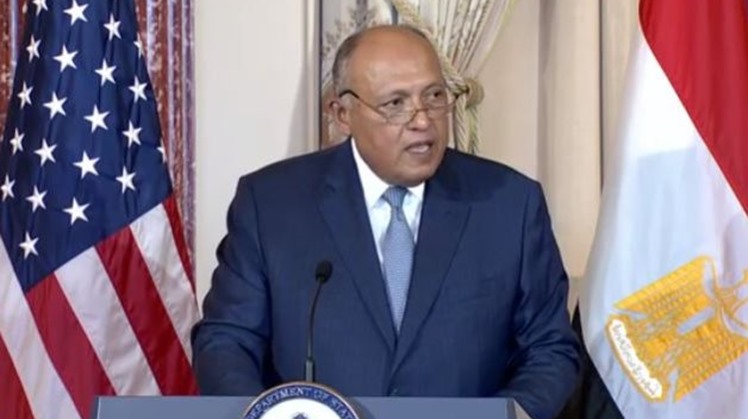 According to the US Department of State, Shoukry said his presence with a delegation of representatives from across the Egyptian Government to attend the strategic dialogue “demonstrates Egypt’s firm commitment to its friendship with the United States – a friendship that has stood the test of time.”

“It is our belief that the partnership between Egypt and the United States has been and remains indispensable for the preservation of peace and the promotion of prosperity,” Shoukry said.

He said the Egyptian-US relationship stands as “the cornerstone of stability in a troubled region.”

“For over four decades, we have striven to elevate every aspect of our cooperation, including on the bilateral front and as regards regional developments, with a view to fulfilling our mutual objectives,” Shoukry added.

The Egyptian FM affirmed that the country has remained a reliable partner that has been willing to share its understanding and insights of our region in support of its common vision.

Shoukry said both Egypt and the US enjoy a high level of coordination at the political level, including the coordination regarding the situation in Gaza.

“Our military and security cooperation, which is acquiring an even greater importance given the many challenges to peace and stability in our region, has deepened in many aspects,” Shoukry said.

He added that the Egyptian-American relations are not limited to political and security cooperation as it also includes economic, scientific, educational, and cultural areas.

“This is why we are stressing at this juncture the importance of strengthening our bilateral relations, especially in sectors of mutual interest, including trade, energy, research, development, and technology, higher education, cultural exchange, and health care,” Shoukry added.

Shoukry highlighted the need for mutual introspection regarding the challenges faced by our respective societies.

“It should be acknowledged that ultimately it will be up to the people of Egypt to decide for themselves what they want with respect to their political, social, and economic system that would ensure and promote the welfare of Egypt’s citizens,” he added.

“The national human rights strategy that was developed through a wide-ranging consultative process with the active engagement of societal stakeholders and which has recent – which was recently launched with presidential endorsement, in addition to the president’s decision last month to end the state of emergency across Egypt, are irrefutable evidence of our determination and resolve to continue to forge our path towards a modern democratic state and for the benefit of our citizens first and foremost,” Shoukry added.

Shoukry said “protecting the social cohesion and territorial integrity of the nation-state, as well as preserving the stability and efficacy of its institutions, is vital in order to fulfill the hopes for change and modernization and to guard against the rise of identity-based politics and sectarian militias. This should be a guiding principle for our joint diplomatic efforts to restore peace and stability to our troubled region.”

Blinken said the Egypt-US diplomatic relationship will mark its 100th anniversary, affirming that both countries are consistently working on maintaining this relationship and expanding the areas of cooperation.
He added that this is the first Egypt-US Strategic Dialogue since 2015.

Blinken said Egypt has played a key role in pushing for an inclusive political process in Libya and for elections to be held as scheduled in December.

“We’ve worked together to help the Libyans resolve pressing economic issues, including the unification of the Libyan Central Bank, and we very much agree on the importance of a full withdrawal of all foreign forces, fighters, and mercenaries from the country,” Blinken said.

Concerning Ethiopia, Blinken said its crisis puts the stability of the Horn of Africa at risk.

“We continue to engage with all parties to the conflict and with partners in the region to encourage peace negotiations without preconditions in pursuit of a ceasefire,” he said.

“The United States also continues to support a negotiated agreement on the dispute over the Grand Ethiopian Renaissance Dam that will address the interests of all parties, including Egypt’s water needs, something that President Biden and President al-Sisi have discussed directly,” he added.

He said Egypt-US strategic dialogue secures the chance to deepen the two countries’ collaborative efforts to tackle global challenges, including COVID-19 and the climate crisis.

“The United States has provided more than 8.2 million doses of safe, effective vaccines to Egypt through COVAX, as well as about $55 million in assistance to help strengthen the country’s capacity to fight the virus, from training health workers to improving the vaccine supply chain,” he added.

Blinken said the USAID is currently funding $600 million in projects to invest in the Egyptian people.

This “includes a new five-year, $36 million program to increase the capacity of small- and medium-sized businesses to export their goods and to improve Egypt’s trade and investment environment,” he said.