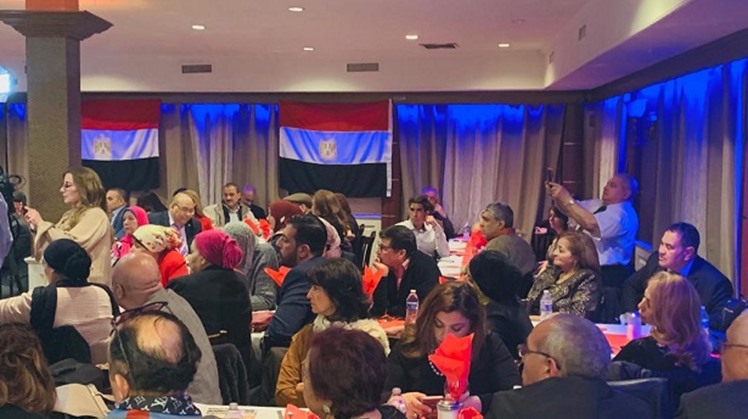 Sun, Apr. 7, 2019
CAIRO – 6 April 2019: The Egyptian Cultural Club in the United States and the Coptic Association held a seminar in New Jerseyon on Saturday, April 6, for the Egyptian community to discuss the constitutional amendments.

During the seminar, President of the Coptic Association Adel Agib stated that Egypt is and will remain a great country, stressing his support to the proposed constitutional amendments. 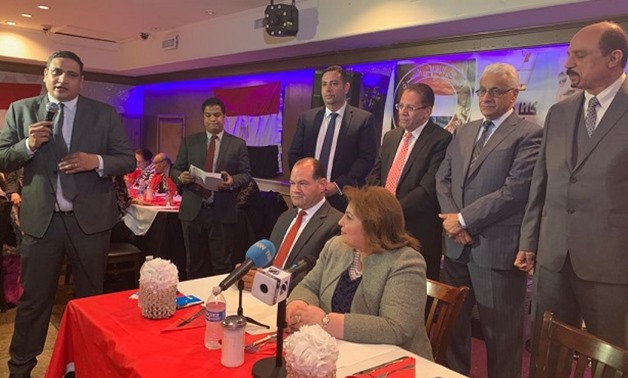 Earlier last week, Egypt’s Ministry of Immigration launched a campaign under the title “Know…participate…even abroad”, which will answer all questions and inquiries that Egyptian expatriates might have regarding Egyptian constitution’s amendments.

Egypt’s Minister of Immigration and Egyptian Expatriate Affairs, Nabila Makram, said that the campaign aims to hold an open discussion with expatriates regarding the constitutional amendments in order to enhance their awareness and political participation.

“We support President Abdel Fatah al-Sisi and wish that Egyptians would heavily participate in the vote,” Agib said.

Head of the cultural club, Tarek Soliman said the constitutional amendments are an important subject, and a very important event, stressing that this seminar aims to make Egyptians in America aware of what is happening.

For his part, Egyptian journalist, Nashaat al-Dehi, said, “We are here for Egypt, and each of us has a special appreciation for the Egyptian state.”

Al-Dehi pointed out that the amendments are necessary and inevitable because the 2014 Constitution was excellent but only at the time, however, not that the circumstances have changed, he said the constitution needed adjustment.

“Egypt is fighting terrorism, it is the first country in the world to honestly fight it, and President Sisi signed the death certificate of the Muslim Brotherhood,” Al-Dehi added.
MP Margret Azir also commended the Egyptian community in the United States for always supporting Egypt.

Azir said the Constitution of 2014 was an emergency constitution that was found to restore state institutions.

She further expressed much happiness over the development of Egyptian women’s status, describing President Sisi’s era as “the golden age for Egyptian women.”
“We are talking here about a real representation of Egyptian women in various fields,” Azir added.

Regarding the 2014 Constitution, the Parliament member said it granted youths, Copts, people with special needs and Egyptians abroad a limited representation in the Parliament, but the amendments will make these privileges permanent.

She also said the amendments also included the return of the Shura Council, which she affirmed “important.” "We in the House of Representatives are in dire need of this council, although I was enthusiastic in the past to cancel it, but today we need it to be the second chamber of legislation, especially as the proposed membership of the Council will be based on the necessary expertise that would aid in the legislative process.”

During his speech, Egyptian journalist and editor-in-chief of Sout Al OmmanewspaperYossif Ayoub said what extinguishes the amendments is the rich state of dialogue and discussion among Egyptians regarding their values and the amended articles.

Ayoub expressed his appreciation to the Egyptian community in the United States, which cites an example of Egyptian’scorrelation with their country as they pose as Egypt’s shield abroad, especially that they have always been strong defenders and supporters of their country.

He further highlighted the important roles played by the Egyptian Cultural Club and the Coptic Associationin uniting the community’s force.

“The social dialogue sessions that the Parliament held to discuss the amendments with representatives of the Egyptian society, including parties, trade unions, media, judges, professors and youths, just reflects a shiny example of how dialogues are democratically conducted in Egypt.

“Especially that these sessions witnessed a wide representation of all opinions and ideas, whether supporting or rejecting the amendments, the matter which enriched the dialogue and gave representatives the opportunity to get a closer look at the opinions of Egyptians and what can be introduced during the final wording of the articles before submitting them for discussion and vote during the plenary session of the Parliament,” Ayoub said.

Ayoub also stressed that during the past period, the Egyptian state witnessed a significant economic and political progress, thanks to the faith and belief of the political leadership and President Abdel Fattah al-Sisi that Egypt deserves to be in a better position. “Therefore, President Sisi has implemented numerous economic and infrastructure projects over the past years, not to mention upgrading several social protection measure to enable Egyptians to live decent lives.”

For his part, Emad Khalil, a journalist with Al-Masry Al-Youm newspaper said the amendments have been subjected to a fierce campaign led by the same terrorist groups that tried to doubt the amendments by saying it would be limited to extending the term of presidency, despite that the amendments include better representation of women and Copts in the Parliament.

He also pointed out that Al-Nour salafist party is the party that rejected the article about defining the authorities of the armed forces and its role of protecting and preserving the state’s civility.

He also said it is wrong to limit the presidential term because there are regional conflicts and difficult economic situations that require President Sisi to remain in his position, adding that Sisi took Egypt away from the brink of a civil war.

Furthermore, Presidential Affairs Editor at Al-Youm Al-Sabea newspaper Mohamed Al-Galy said President Sisi was keen from the first day he became president to preserve the rights of citizens, and always refused to differentiate between Egyptians on a religious basis, as a citizen is only “Egyptian,” not a Muslim or a Christian.

He also described the year of the Brotherhood's rule as a "doom," in which they tried to falsify the Egyptians' consciousness and blow up their identity. However, President al-Sisi dealt with this matter with all transparency and determination, and thus Egypt has returned as we know it.

Also, Presidential Affairs Editor at Al-Masry Al-Youm newspaper Mohsen Semeika said President Sisi is very far from the amendments, however, “We need to admit that we want him to continue his achievements and huge projects to drive Egypt into the stature that it deservers. He also said if the Parliament did not submit these amendments, masses would go out in the streets and demand him to stay.