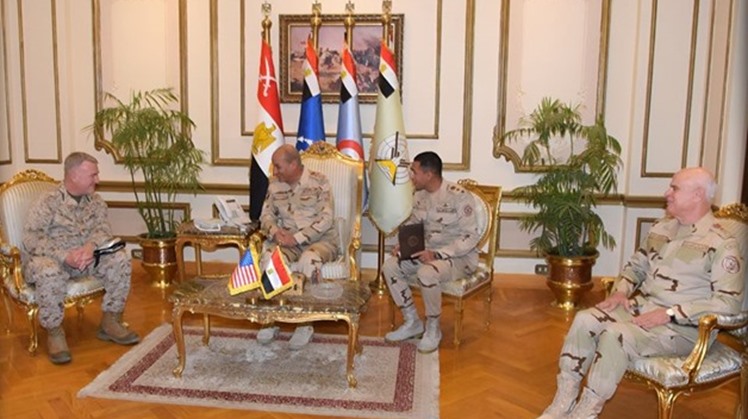 Mon, Jan. 27, 2020
CAIRO – 27 January 2020: United States Central Command chief Kenneth McKenzie affirmed keenness to back partnership relations and coordination between the armed forces of Egypt and the US, as he met with Egyptian Defense Minister Mohamed Zaki on Monday in Cairo, a statement by the Egyptian military said.

Zaki; Chief of Staff of the Egyptian Armed Forces Mohamed Farid; and the US official met in the Egyptian capital as McKenzie and a US delegation have made a visit to Egypt, which is set to last for several days, the statement published by Egyptian army’s spokesman Tamer al-Rifaei read.

During the meeting, they reviewed the regional and international efforts, as well as the counter-terrorism efforts made by the Egyptian armed forces, aiming at eliminating terrorism and achieving security and stability in Egypt and the Middle East. They also discussed developments witnessed by the region.

For his part, Zaki, who is the General Commander of the Armed Forces, stressed the need for military cooperation and coordination between Egypt and the US, to face the joint challenges and establish security in the region.

Egypt has discussed boosting military cooperation with a number of countries over the last year, including Germany, Russia and Montenegro.

In November, President Abdel Fatah al-Sisi received in his residence in Berlin German Defense Minister Annegret Kramp-Karrenbauer as they agreed to reinforce channels of consultation and coordination over regional matters of mutual interest and supraregional impact.