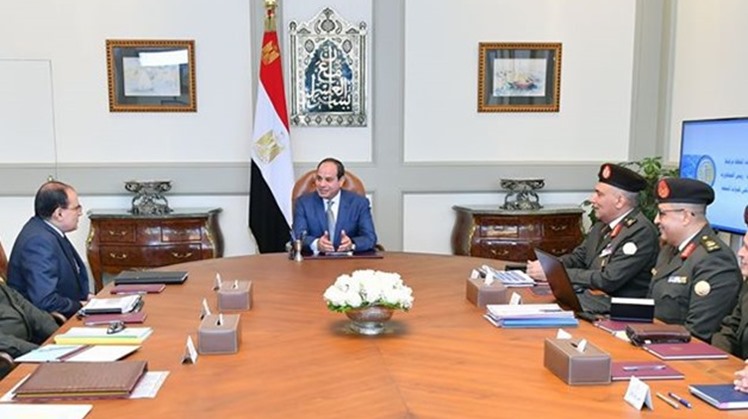 Sun, Dec. 1, 2019
CAIRO – 1 December 2019: President Abdel Fattah El-Sisi ordered on Saturday providing the latest services in the New Administrative Capital in East Cairo, within a strategic perspective, the Presidency said in a statement.

This perspective must take into consideration the long-term development, the appropriate economic path, and the pre-agreed timetables, presidential spokesman Bassam Radi cited Sisi as saying, in a meeting with head of the Armed Forces Engineering Authority Ehab al-Faar.

The meeting reviewed the executive status of a number of ongoing projects carried out by the Engineering Authority in the New Administrative Capital, Radi said, especially the governmental district, which includes the buildings of various government institutions and entities; the central axis of the district; and the Islamic cultural center.

The meeting also reviewed progress in a number of national projects, especially roads and axes nationwide, within the framework of the national road network, taking into account the authority's key role in the overall development plan of the Egyptian state.

The meeting also reviewed plans for the establishment of desalination plants nationwide as part of the country's strategy to improve the efficiency and good management of water resources.

Sisi laid the first stone of the New Administrative Capital in East Cairo in July 2018.

With an area of 170,000 feddans, the new capital is set to include 20 residential areas expected to accommodate 6.5 million people and a road network of 650 km in length. The capital includes an international airport and is set to have an electric train to link it with the 10th of Ramadan and El-Salam cities.

It will feature 1,250 mosques and churches, a 5,000-seat conference center, nearly 2,000 schools and colleges, over 600 medical facilities, and a park that is projected to be the world’s largest.

The NAC is located in the area between the Cairo-Suez and Cairo-Ain Sokhna roads, east of the regional ring road. This is roughly 60 kilometers (37.3 miles) from the cities of Suez and Ain Sokhna.