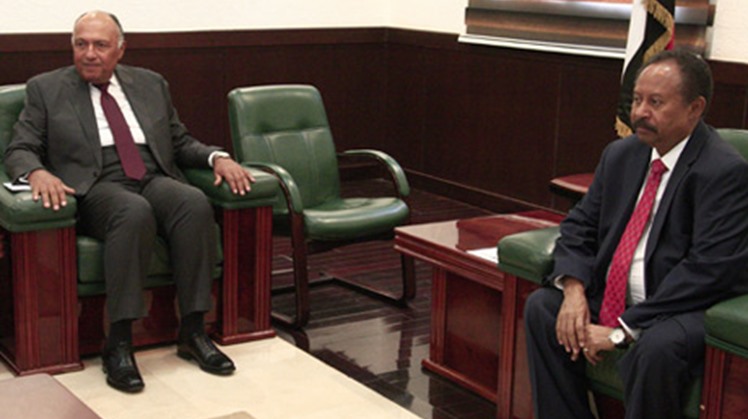 Tue, Sep. 10, 2019
CAIRO - 10 September 2019: Egypt's foreign minister called on Monday for more support for neighboring Sudan's new civilian-led government, including getting it off the U.S. list of countries sponsoring terrorism.

The U.S. named Sudan a state sponsor of terrorism in 1993. In one of its last acts, the Obama administration began a formal process to de-list Sudan, but this was put on hold when mass protests erupted in December against President Omar al-Bashir's three-decade rule.

Sameh Shoukry said Egypt is now working with Washington to end Sudan's international pariah status. The country has a newly installed government under a power sharing agreement between the pro-democracy movement and the military, which ousted al-Bashir in April and many feared would cling onto power, according to Al-Ahram online.

"What the Sudanese people have achieved is a role model,'' Shoukry told a joint news conference at the Sudanese capital, Khartoum, with the country's first woman foreign minister, Asmaa Abdalla.

He said Egypt has been working with regional and Western allies to build support for the transitional government and that efforts "to coordinate strongly with the Sudanese government will continue.''

Shoukry was the first foreign official to visit Sudan after its new cabinet was sworn in Sunday.

He also met with Gen. Abdel-Fattah Burhan, the head of the sovereign council, and the new prime minister, Abdalla Hamdok.

Sudan says that removing it from the U.S. list of countries sponsoring terrorism is crucial to rebuilding the country and readmitting it into the international economy after years of sanctions.

Prime Minister Hamdok said last week that he'd already held a "long discussion'' with the Trump administration on the matter.

During the meeting with Burhan, Shoukry said that Egypt fully supports the new Sudanese government at this stage on the bilateral level and in the various regional and international forums.

The Egyptian FM affirmed that Egypt spares no effort in maintaining contact with Sudan and activating all joint action mechanisms, adding that President Abdel-Fattah El-Sisi's directives are clear regarding strengthening bilateral relations with Sudan.

Shoukry congratulated the new premier on his post and the country's success in overcoming such a critical phase in its history and starting a new stage full of prosperity and growth that meets the aspirations of the Sudanese people.

They reviewed the activities of the joint technical committees between the two countries including those on the Nile water, river transport, foodstuffs and others with the aim of boosting cooperation and coordination in facing common challenges.

Shoukry said Egypt will send relief aid to the flood-stricken areas In Sudan. The Sudanese official expressed appreciation for the distinguished relations between the two countries.

The Egyptian FM reviewed the priorities of the new government during the transitional phase and stressed the need to strengthen regional and international relations at this stage, particularly strategic ones with Egypt for the best interest of both peoples.

During a meeting between Shoukry and Sudanese FM Abdalla, she expressed thanks to the Egyptian people and government for supporting Sudan and its people in their choices and their free will in outlining their future and maintaining the ties among the Nile River peoples.

The Egyptian FM added that he invited his Sudanese counterpart to visit Cairo as soon as possible to resume political consultations in order to establish new aspects of cooperation.