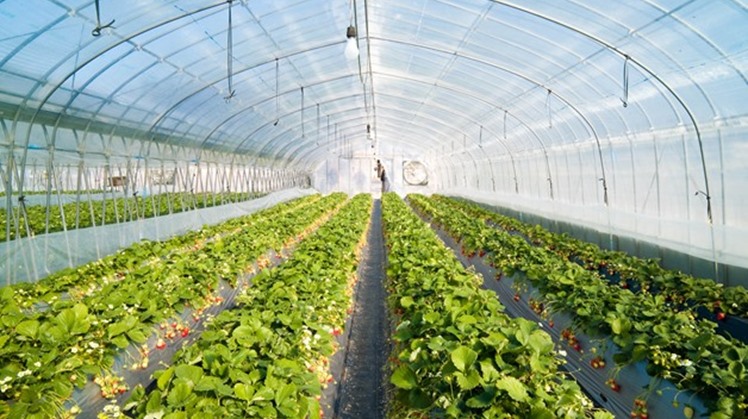 Sun, Aug. 18, 2019
CAIRO - 17 August 2019: President Abdel Fatah al-Sisi inaugurated on Saturday a number of national projects including 1,300 greenhouses set up on an area of 10,000 feddans as part of the second phase of Mohamed Naguib sector for protected agriculture.

During the inauguration ceremony, Sisi stated that the national project to establish 100,000 greenhouses would fulfill the needs of 20 million citizens.

The statement was made while inaugurating 1,302 greenhouses lying over 10,000 feddans, a sorting and packaging factory, and a seed production complex at Mohamed Naguib Military Base. The new greenhouses are part of the National Project for Greenhouses executed by the National Company for Protected Crops affiliated to the Armed Forces National Service Agency, Egypt Today reported.

The National Project for Greenhouses aims at the establishment of integrated developmental agrarian communities and the production of high-quality agricultural goods while achieving efficient use of land and water resources. In addition to creating employment opportunities, the project will provide training for workers on the use of modern technology in the sector.

The output of the project is equivalent to the harvest of one million feddans of soil agriculture, and will be offered to consumers locally in suitable prices. Until present, the greenhouses project at Mohamed Naguib Military Base has secured 15,000 jobs in different fields, General Manager of the Armed Forces National Service Agency Mostafa Amin stated.

The official underlined that the total amount of Egypt’s water resources is 80 billion cubic meters. Of which, 70 percent are supplied by the Nile River and 79 percent are directed at agriculture. The greenhouses within the national project consume less water than traditional agriculture by 80 percent, and are expected to save 40 percent of the country’s water resources.

Amin cited the data released by the Central Agency for Public Mobilization and Statistics (CAPMAS) showing that the production of vegetables declined to 12.9 million tons in 2018 from 15.4 million tons in 2014. That was coupled by an increase in the number of resident citizens from 86.1 million to 96.6 million within the same period. As estimated by CAPMAS, each citizen consumes around 102 kilograms of vegetables per annum.

Chairman of the National Company for Protected Crops Mohamed Abdel Hay Mahmoud revealed that 98 percent of vegetable seeds planted annually are imported at a cost of $1.5 billion. The official declared that the company plans to produce 4.7 billion seeds, which are the equivalent of 60 percent of Egypt’s needs over four years.

Details of the Project

In December 2018, the president witnessed the laying of the foundation stone of the National Greenhouses Project in the 10th of Ramadan City. In February 2018, the first phrase of a project to establish greenhouses on an area of 100,000 feddans in Mohamed Naguib Military Base was launched. The base is located in el-Hamam town at Marsa Matrouh.

Six hundred medium-technology greenhouses - stretching over 2,500 feddans - had been built in the 10th of Ramadan City before the visit of the president. Later on, others were established over 1,600 feddans so that the total in the city has become 4,100 feddans encompassing 900 greenhouses. The size of each is 2.5 feddans. Those are cultivated with vegetables. However, there are 200 feddans that are cultivated with mango.

A sorting and packaging plant was established with a daily sorting capacity of 400 tons. The capacity of the refrigerators is 800 tons. The project targets the production of 114,000 tons of vegetables catering to around one million residents of Cairo and Sharqeya.

In Al Amal City in Ismailiyah governorate, 529 greenhouses were built over 100 feddans. 1,640 feddans will be cultivated with Mango eastern new Ismailiyah city. The target for 2019/2020 is to produce 4,300 tons of vegetables catering to 40,000 citizens in the governorate.

In Ismailiyah’s Abou Sultan, 2,353 greenhouses are being built over 12,500 feddans. The size of each is 2.5 feddans. They are established in collaboration with Chinese companies and will be inaugurated by the end of this year. The production targeted is 259,000 tons of vegetables per annum to fulfill the needs of 2.5 million citizens in Suez Canal cities. A sorting and packaging plant is built with a daily sorting capacity of 200 tons. The capacity of the refrigerators is 1,800 tons.

In Fayoum’s Lahoun, 13,000 feddans contain 800 medium-technology greenhouses. The size of each is six feddans. They were built in collaboration with a Spanish company. The annual production capacity is 301,000 tons of vegetables to fulfill the needs of 2.7 million citizens in Cairo and Giza. A sorting and packaging plant will be established with a daily sorting capacity of 800 tons. The capacity of the refrigerators will be 1,800 tons.

Chairman of the National Company for Protected Crops revealed that the largest project for protected crops is under construction in Upper Egypt’s Minya and Beni Suef governorates as it spans over 62,000 feddans and will offer 250,000 job opportunities.