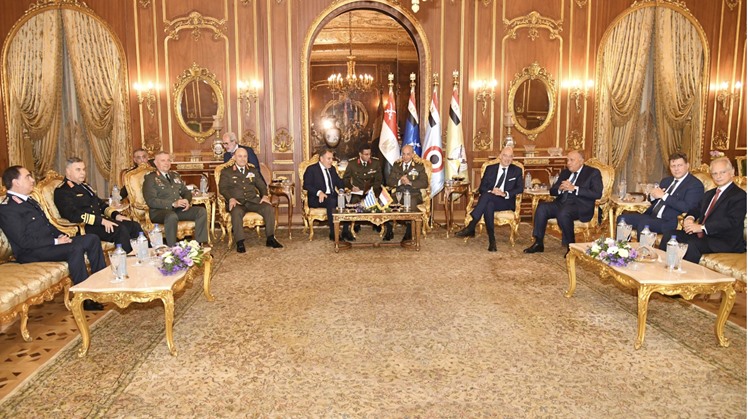 Thu, Nov. 24, 2022
Egypt’s Minister of Defense Mohamed Zaki and Greek Minister for National Defense Nikos Panagiotopoulos has signed an MoU in the field of air and sea search and rescue, Egyptian Military Spokesman Gharib Abdel Hafez said in a statement on Wednesday.

The MoU stipulates providing all aspects of support between the two sides in order to achieve integration in the field of air and sea search and rescue.

The MoU was signed in the presence of Egyptian Foreign Minister Sameh Shoukry and his Greek counterpart, Nikos Dendias, the spokesman said.

For his part, the Greek minister expressed his full appreciation for Egypt's active role in its regional and international surrounding, hoping that the next stage will witness support for new horizons of military cooperation for both countries.

Zaki held a meeting with his Greek counterpart and his accompanying delegation, where they discussed a number of issues of mutual concern within the framework of enhancing the fields of military cooperation and transferring expertise between the Egyptian and Greek armed forces.

Chief of Staff of the Egyptian Armed Forces Osama Askar; General Konstantinos Floros, the Chief of the Hellenic National Defence General Staff; and a number of armed forces’ commanders attended the meeting, the spokesman noted.

Egyptian and Greek foreign ministers also signed on Tuesday an agreement on seasonal workers that aims to provide job opportunities for Egyptians in Greece in the field of agriculture, Shoukry said in a press conference with Dendias during the latter’s visit to Cairo.

Shoukry and Dendias lauded profound relations between Egypt and Greece in various fields and held talks to discuss regional situation, developments of Ukrainian-Russian war, and the food and energy security.