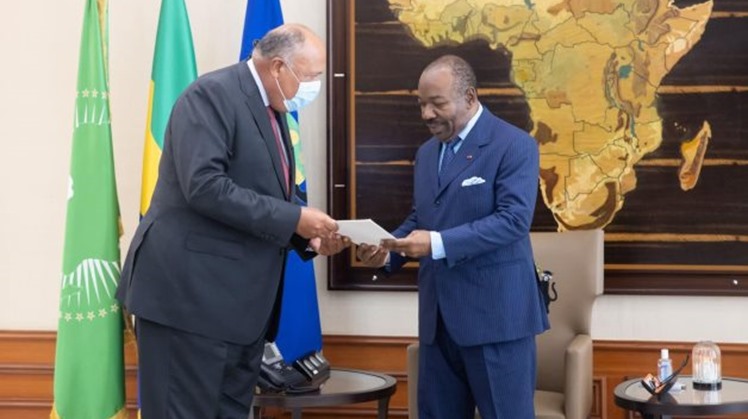 The world leaders’ summit will take place on 7-8 November.

Shoukry and Ondimba, during their meeting in Gabon, discussed enhancing bilateral cooperation between the two countries in all fields as well as issues of mutual concern on the continental and international levels.

In this regard, Shoukry and Ondimba agreed on the importance of continuous coordination during the coming period to formulate a unified African stance regarding priority issues in the continent.

Shoukry reviewed the Egyptian vision for the most important topics on the agenda of COP27, stressing that Egypt is determined during its upcoming presidency of the conference to express the aspirations of the African countries and their climate-related priorities.

This comes especially as the African continent is one of the regions in the world most affected by the negative consequences of climate change.

Shoukry has been in Gabon to attend Africa Climate Week. In a speech on Monday, Shoukry affirmed that Africa is committed to spending 2-3 percent of its suffering economy each year to counter climate change. Meanwhile, Africa’s share of greenhouse gas emissions is only four percent.


These figures, he said, show the African responsibility but also the lack of “climate justice.”

He called on all African communities of governments, youths, women, the civil society, and the African private sector to press for climate justice to counter the changes.

Shoukry thanked Gabon for hosting the Africa Climate Week, saying it is a vital platform to deal with the African needs and challenges against the phenomenon.

He added that developing nations in Africa need to deal with all these repercussions on top of internal difficulties such as the challenges of development.

“Egypt understands these challenges and continues to deal with them and to evaluate the progress of previous vows,” the foreign minister added.