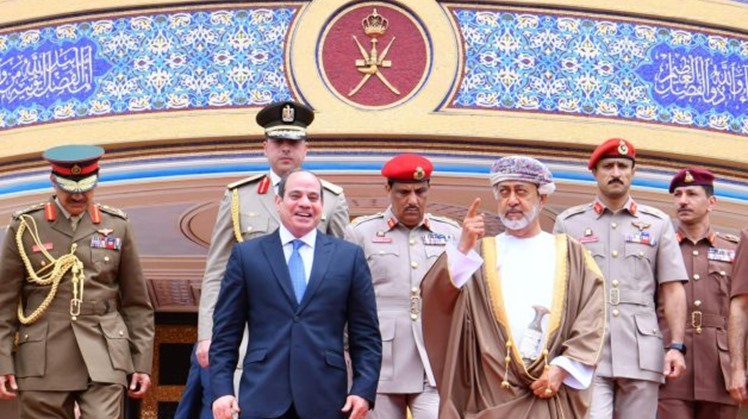 The presidency's press statement indicated that the Sultan valued the distinguished role played by Egypt in the reinforcement of joint Arab work in the face of crises and challenges, which is essential for stability in the Middle East and enhancement of the developmental, economic, and social conditions.

On his side, the president lauded the level of Egyptian-Omani coordination and similarity in visions on issues of mutual interest. That is best embodied in the two countries' congruence on backing efforts deployed to maintain the security of navigation in the Red Sea and the Arab Gulf. That also extends to combating terrorist and extremist organizations.

The two leaders similarly exchanged views on the repercussions of the Russian-Ukrainian War on the region, and how to handle the crisis on the Arab scale. They also conferred over the upcoming summit – scheduled for mid-July - encompassing the United States, Egypt, Iraq, Jordan, and the Gulf Cooperation Council (GCC) countries.

The meeting equally covered bilateral economic cooperation, and bolstering joint investments, building on the outcomes of the convention of the Egyptian-Omani Business Council, which was held in January 2022.

President Sisi and Sultan Haitham tackled the Yemeni issue, agreeing on the consolidation of bilateral coordination to support the unity, sovereignty, and territorial integrity of the fellow Arab country. That is in addition to backing a political settlement that would end the suffering of Yemeni people and fulfill its ambitions.

The two chiefs of state reiterated that the security and stability of Yemen is integral to the security of the Arab region and the Red Sea region.