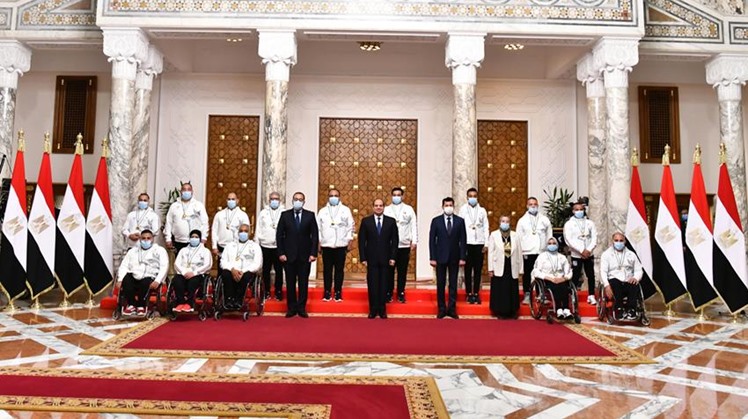 Sisi granted Mohamed El-Zayat, the winner of Egypt’s only silver medal in Taekwondo in the 2020 games, a second-class medal of sport.

The four players won silver medals in the 2020 games.

During the honoring ceremony, Sisi praised the achievements made by the sports champions and their technical teams to uphold the image of the country and enhance its position in the international sports events, the presidential spokesman said.

The president hailed the champions, saying they were at a high degree of national responsibility and have gained the respect and appreciation of the entire Egyptian people.

These champions have been a role model for the youth to reach their aspirations, Sisi added.

The president “also affirmed that Egypt’s Paralympic champions have proven that the strong will and solid determination are capable of conquering difficulties to achieve the accomplishments and reach the desired goals,” the spokesman said.

Sisi ordered intensifying support provided to the Egyptian champions in preparation for the next Paralympic games in 2024 with the aim of achieving further sports achievements that contribute to upholding Egypt’s deserved regional and international position.

For their part, the sports champions expressed their greeting to Sisi, affirming that being honored by the president represents a powerful boost for them to achieve further sports accomplishments to serve the nation, the spokesman said.

They also praised Sisi’s continuous keenness to remove all obstacles hindering the Egyptia sports champions in the Paralympic games from achieving further achievements in their sports career.

The Tokyo 2020 Paralympic Games, postponed to 2021 due to the coronavirus pandemic, were held between August 24 and September 5 in the Japanese capital as the 16th of its kind.