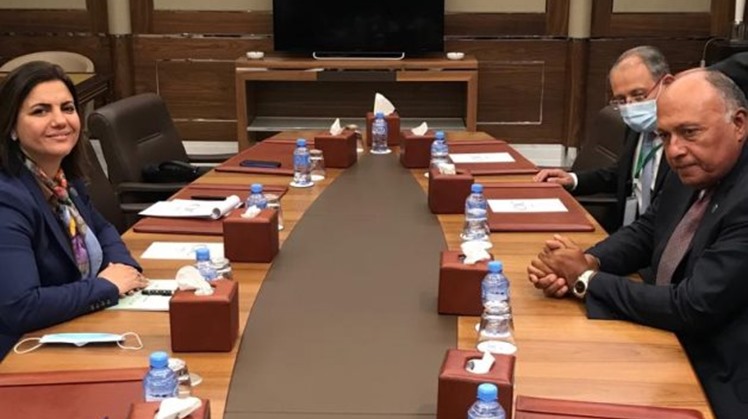 Tue, Aug. 31, 2021
CAIRO – 31 August 2021: Egypt’s Foreign Minister Sameh Shoukry discussed on Monday boosting bilateral cooperation frameworks with his Algerian counterpart, Najla Al-Mangoush as they met in Algeria on the sidelines of a ministerial meeting on Libya.

Shoukry and Mangoush’s meeting came on the sidelines of a meeting for foreign ministers of Libya’s neighbouring countries held in Algeria.

Shoukry’s meeting with Mangoush addressed coordination with the aim of building on the outcome of the Libya neighbours’ meeting to reach comprehensive political settlement to the Libyan crisis, a statement by the Egyptian Foreign Ministry read.

Shoukry on Monday urged accelerating efforts to take all the measures required within the framework of readiness for the Libyan elections scheduled for 24 December.

Participating in the meeting, Shoukry said these efforts come to implement the roadmap agreed upon by Libyans and should lead to holding comprehensive and credible elections.

Shoukry said the elections would end the extended transitional state and put an end to the state of Libyan division, a statement by the Egyptian Foreign Ministry read.

This aims to launch a new stage in which the Libyan state institutions would be supported in a way that meets the aspirations of the brotherly Libyan people and prioritizes the national interest over other narrow interests, Shourky added.

During the meeting, the Egyptian foreign minister reiterated his country’s firm stance to support security and stability in Libya.

He also affirmed the importance Egypt attaches to prioritizing the Libyan political solutions within the framework of protecting the Libyan unity and national institutions.

This should lead to achieving a comprehensive settlement that takes into consideration all sides of the Libyan issue, Shoukry added.

In his speech, Shoukry also affirmed the important role assigned to the countries neighboring Libya within the framework of ensuring the stability of the security and political situations in Libya.

Shoukry also praised the achievements of Libya’s 5+5 Joint Military Commission, the latest of which was the opening of the coastal road linking the east with the west.

In this regard, the Egyptian foreign minister affirmed the need to provide full support to the commission so that it can fulfill its various duties, including ensuring the exit of all foreign troops as well as foreign fighters and mercenaries.

Libya lives a glimmer of hope to get out of the dark tunnel it has been going through for years after reaching ceasefire between warring parties last year.

On March 15, the GNU members and prime minister took the oath of office before the Tobruk-based House of Representatives.

Egypt and other Arab and western countries have affirmed the need to stick to the roadmap set by Libyans and hold the Libyan general elections on December 24 as planned.