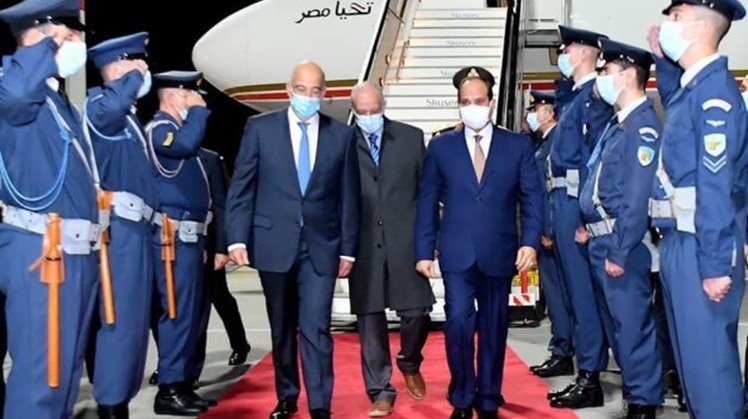 Wed, Nov. 11, 2020
CAIRO – 11 November 2020: Egypt's President Abdel Fatah al-Sisi received on Wednesday the highest Medal of Honor in Greece by counterpart Katerina Sakellaropoulou. In return, he presented her with Order of the Nile, the top in Egypt.

"Egypt supports Greece against any provocative attempts Eastern the Mediterranean or (acts threatening) its maritime borders in alignment with international law," Sisi told Sakellaropoulou Wednesday in a visit to Athens.

The president had begun his visit with laying wreath on the Unknown Soldier Tomb before holding a meeting with Greek counterpart.

President Sisi said that Egyptian-Greek relations have been remarkably advancing pointing out to the recent ratification of the maritime demarcation agreement between both states in the Mediterranean. He added that the move reflects the amount of understanding between the two countries and the strength of bilateral ties.

The president stressed that terrorism and extremism are not linked to any religion saying those are forms of intellectual deviation that causes suffering in the whole world. "It's important (that terror acts) do not become a reason for insulting religions and faithful individuals," President Sisi stipulated.

Spokesperson of the Egyptian Presidency Ambassador Bassam Rady indicated in a statement that the visit takes place in light of continuous consultation on the bilateral level and on the trilateral level with Cyprus.

The meetings are set to tackle mutual cooperation, particularly in the sectors of energy and trade as well as investment opportunities in Egypt.

President Sisi will also exchange views with Greek officials on regional and international affairs of joint concern, mainly developments in the Middle East and combating terrorism and extremism.