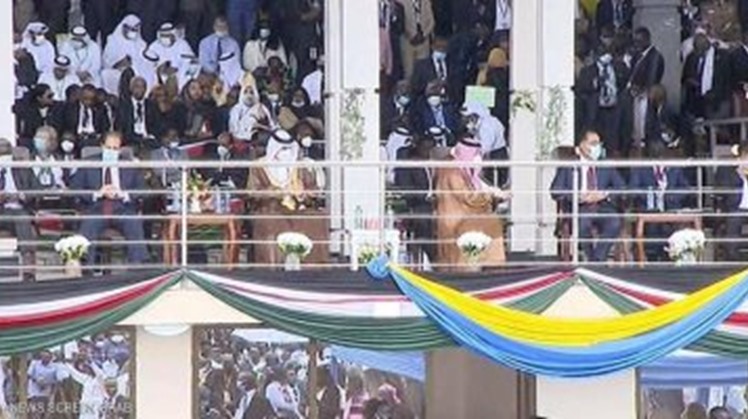 Sat, Oct. 3, 2020
The Sudanese transitional government and the Revolutionary Front Alliance signed the final comprehensive peace agreement in Juba today, Saturday, in the midst of an international, African and Arab presence after negotiations that lasted a year. Prime Minister Dr. Mustafa Madbouly headed the Egyptian delegation at the final signing ceremony, where he signed the agreement as Egypt is one of the witnessing countries. and guarantor of the agreement.

The signing ceremony at Freedom Square in the capital of South Sudan, Juba, was attended by the presidents of Chad, Djibouti and Somalia, along with the Prime Minister of Ethiopia, the UAE Minister of Energy, the US Special Envoy for Sudan and South Sudan and representatives of a number of Western countries.

Among the armed groups that signed the Juba Agreement, the Sudan Liberation Army Movement, Arko Minawi Wing, the Justice and Equality Movement, and the Popular Movement Malik Aqar Wing, along with other factions.

While the Sudan Liberation Movement, led by Abdul Wahid Muhammad Nur, failed to participate in the peace process in Darfur, negotiations are still continuing with the northern Popular Movement faction, led by Abdel Aziz Al-Hilu, to join him in the negotiations.

Al-Hilu demands that Sudan, whose law is based on Islam, become a secular state, which constituted a major obstacle that prevented Al-Hilu from joining the agreement.

The agreement seeks to reform the military establishment in the State of Sudan through merging the forces of the armed movements mentioned in the security arrangements clause, provided that an exchange of experts will take place between the old and the new military, according to the SPLM Vice President.

The delegation of the introduction to the transitional authority arrived in Juba, which included a number of officials in the Sudanese Sovereignty Council and the transitional ministers, as well as representatives of the Forces of Change (the ruling coalition in Sudan), and national figures.

The streets of the capital of South Sudan, Juba, were covered with the flags of Sudan and the state of South Sudan, and the Freedom Square in the center of the city was decorated with a peaceful celebration that would put an end to the state of war and establish a just peace throughout Sudan.

The agreement includes eight protocols, which dealt with the most prominent issues at stake, namely, power, wealth, displaced persons and refugees, nomads and shepherds issues, justice, truth and reconciliation, compensation and reparation, land and hawakeer, security arrangements, and the Darfur Peace Agreement.

Press sources confirmed that the signatories of the armed factions would get among themselves, at the national level, three seats in the ruling council, five ministries, and a quarter of the seats in the Transitional Legislative Council, amounting to a total of 300 seats.

The factions that signed the agreement will also get 40% of the positions in their regional governments, which will receive 40% of the revenues collected locally, and a new fund will pay $ 750 million annually for 10 years to poor southern and western regions.

The agreement also provided for granting the Blue Nile and South Kordofan regions a self-rule formula through which the competencies of the local and federal authorities were defined, including the enactment of laws and legislation that was agreed to be based on the 1973 constitution, in addition to the formation of requirements, the most important of which is the Commission for Religious Freedom.

It is noteworthy that the conflict erupted in Darfur in 2003 after militants took up arms in the face of the central government, which led government forces to start a fierce campaign that included acts of ethnic cleansing and violence on a large scale. The area has gotten much quieter in the past few years.