The anniversary of the discovery of Tutankhamun's Golden Pharaoh in 1922; the most important archaeological discovery of the 20th century. 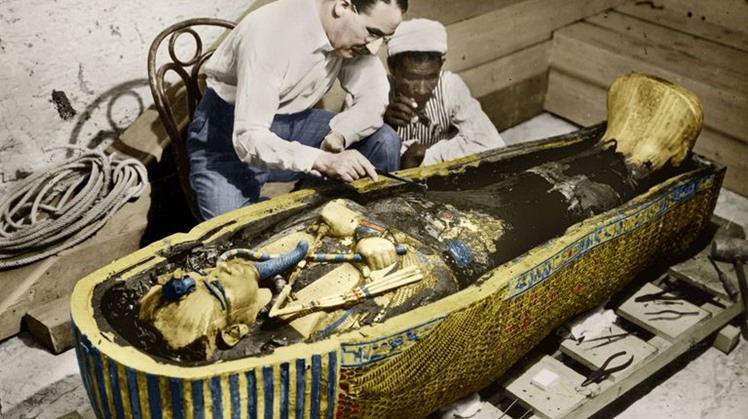 Mon, Nov. 4, 2019
The discovery of the 1922 golden pharaoh's tomb of Tutankhamun in Luxor, which is genuinely the most important archaeological discovery of the 20th century, was reported today.

Everybody proceeds from the idea that English Carter is the discoverer of the cemetery, which is recorded in history and recognized by the books, but what about the oppressed soldiers in this global discovery, specifically what about Hussein Abdul Rasul.

Dr. Zahi Hawass, former Minister of Antiquities, said in previous statements that one of those who discovered the tomb of King Tutankhamun is a 12-year-old child named Hussein Abdel-Rasoul, carrying water on a donkey for workers who were digging for another discovery in the area. He was informed by the child, and then found the tomb of Tutankhamun. He pointed out that the child, "Abdul Rasul," and allowed "Carter" to wear the necklace "Tutankhamun."

While another story says that work began in 1914 and then stopped because of the war and resumed again in 1917 and for five consecutive years did not search for anything, so that Lord Carnavon, the financier of the project, began to think about stopping spending on the mission, was Hussein Abdul Rasul smaller The workers in the Carter team, and it was just a work and did not realize that it would be the first discoverer of the cemetery, and one day, Hussein Abdel-Rasul, digging down the tomb of King Ramses VI and collided his ax in a ladder, to shout spontaneously calling Carter, who was distressed and disappointed, "Sidi hit Distressed by a ladder, Carter hurriedly and ordered to continue digging up to Leading to the degree of the 16 inside the tomb of Tutankhamun, and the next day was "Carter" and "Karnfon" inside the burial chamber of King.