Nine Parts of the Human Soul According to the Ancient Egyptians 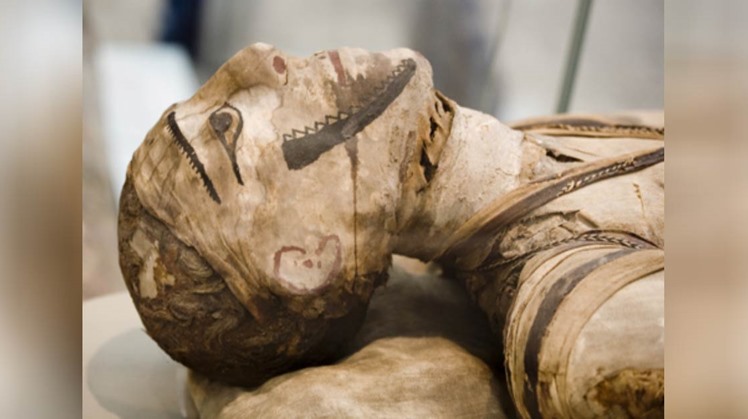 Tue, Aug. 20, 2019
Ancient Egyptians had their own complex ideas about what makes up the human soul, and their beliefs involved dividing the soul into nine parts: Khat, Ba, Ren, Ka, Shuyet, Jb, Akh, Sahu, and Sechem. Eight of these were immortal and passed into the afterlife and the ninth was the physical body which was left behind. The parts all had their own unique functions, and by analyzing these it is possible to understand more about what the ancient Egyptians believed.

After a person had died, offerings would still be made to the soul at their physical body because it was believed the rest of their soul could supernaturally absorb the benefits and nutrients from the offerings. The body was a link to the essence of the person who had once inhabited it – a concept which is seen in many other interpretations of the soul.

Ba – The Personality
The Ba is perhaps the closest the ancient Egyptians had to the modern ideas about the soul. It made up all the elements of a person that made them unique. Taking the form of a bird with a human head, the Ba was the way the soul could move between the mortal realm and the spiritual one. The Egyptians believed the Ba still traveled between both realms occasionally while a person was still alive, but that the journey the Ba made between worlds increased significantly after death. 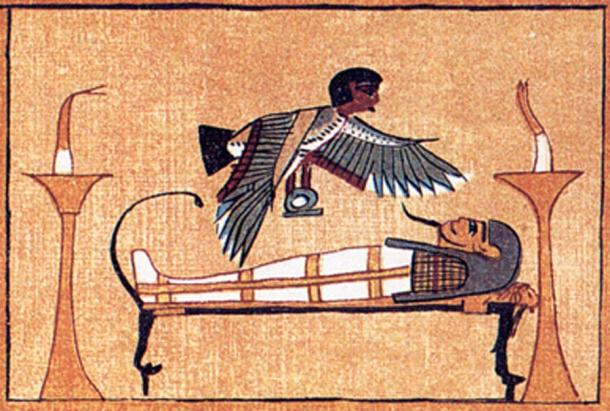 The idea that the Ba would spend time in places a person loved during life is also similar to some modern ideas about ghosts and spirits lingering at a place once loved by a particular person when they were alive. The Ba was also believed to be connected physically to the body and it would remain with the Khat when it was not visiting other physical places or communing with the gods.

Ren – The True Name
Ancient Egyptians were given a name at birth which was kept secret to everyone but the gods. This name was considered an extremely important and powerful part of the soul with the ability to destroy a person and their soul permanently.

Throughout life, an individual was known only by a nickname so that no one would be able to learn their true Ren and gain the powers it contained, or the chance and knowledge needed to destroy it.

As long as the Ren still existed, a soul had the power to keep on surviving. As long as embalming was correctly completed and mummification was successful, the Ren meant a person and their soul would exist for eternity. 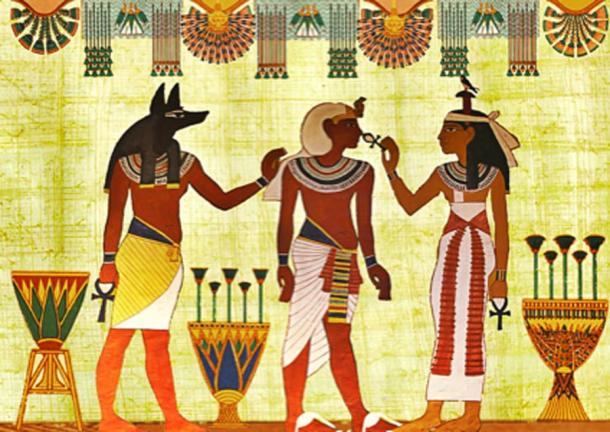 A series of texts beginning around 350 AD called the Book of Breathings compiled the names of ancient Egyptians and wrote them down physically to try and ensure they survived. The power of the name was acknowledged by the creation of the cartouche – a special way of writing a name inside a protective magical barrier – which was used around royal names.

Just as preserving the name, the Ren was crucial to preserve the soul. Destroying the Ren was a way of making sure a soul was destroyed forever. This is part of the reason some names of hated figures such as Akhenaten were ritually and destructively removed from monuments and texts after their death.

Ka – The Vital Essence
The Ka was the vital essence of a person which distinguished between life and death. The Egyptians believed that either the fertility goddess Heqet or the goddess of childbirth Meskhenet breathed the Ka into a body at the time of birth. The Ka is what made the new infant truly alive.

They believed the Ka was sustained throughout life through food and drink. They believed the Ka still needed nourishment after death, which is the reason food and drink would be presented to the Khat. They did not think the Ka still needed to eat the food physically, but thought the nutrients were absorbed by the Ka in a supernatural manner after death.

A kind of offering tray called a Soul House which was made of clay shaped into a house was developed to present the Ka with offerings. Some surviving examples even have clay models of food in them, and they have been used as a way of determining what an average house would have looked like in ancient Egypt. 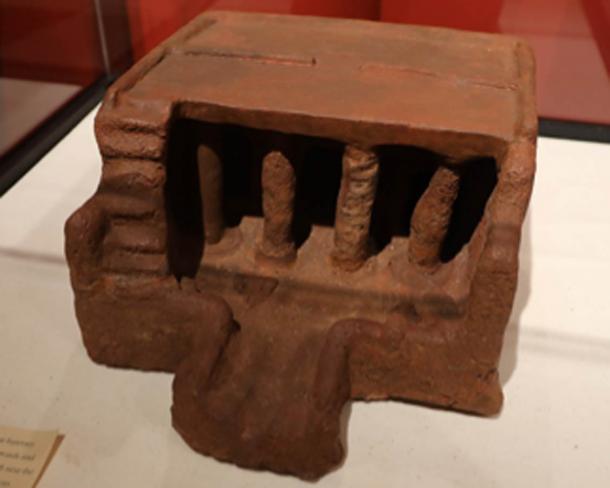 Some people believe Soul Houses were even intended as a physical place for the Ka to reside, though there is no evidence of this, and it is more likely they were simply an elaborate way of presenting offerings of food and drink to the deceased.

Shuyet – The Shadow
Ancient Egyptians believed the shadow was actually a part of a person’s soul. It was ever present, and they believed it contained a part of what makes each individual unique.

As in many other cultures, the Egyptians also believed the shadow was linked in some way to death. The Shuyet was believed to be a servant to Anubis, the Egyptian god of death and the afterlife. Physical depictions of the Shuyet were of a human figure shaded entirely black. 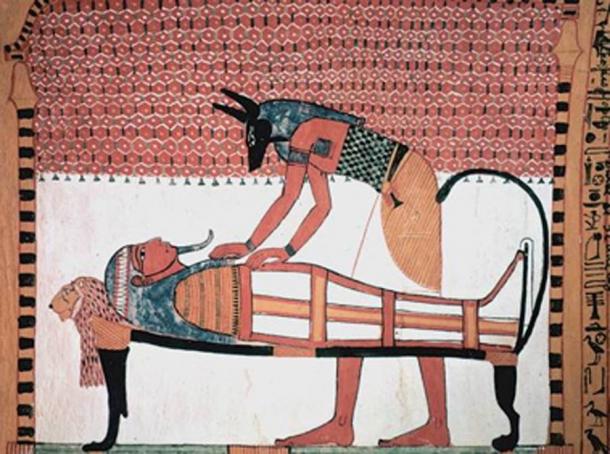 Some people had a ‘Shadow Box’ among their funerary items so that the Shuyet had a place to inhabit. In the Egyptian Book of the Dead the soul is described as leaving the tomb of the deceased during the day in the form of a shadow. This Shuyet is considered only a shadow of the person it represents and not a major or destructive manifestation of the deceased in the physical realm.

As an element of the soul, the Jb was the part a person used to gain access to the afterlife. The heart would be weighed on a scale against a feather – the feather of truth – and if the heart weighed more than the feather, a person was denied access to the afterlife and their heart was eaten by a demon called Ammit who was described as a fearsome lion-hippo-crocodile hybrid. 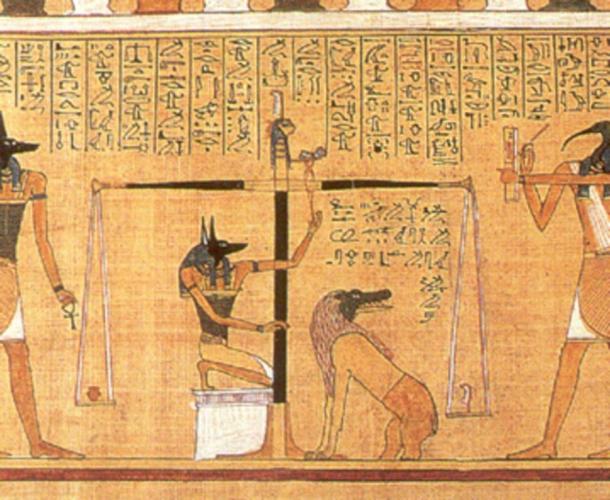 To preserve and protect the Jb the heart would be specially embalmed, and then placed with the rest of the body along with a heart scarab which was a magical amulet intended to prevent the heart giving away too much information about a person and jeopardizing their success in passing the weighing of the heart.

Akh or Ikhu – The Immortal Self
The Akh was a magical combination of the elements Ba and Ka which represented the enlightened immortal being after death. This magical unification of Ba and Ka would only be possible if the correct funerary rites were performed after death.

The Akh did not stay with the Khat as many other elements of the soul did, it lived among the stars with the gods, though it did return to the body on occasion if necessary. It was a representation of the intellect, will, and intentions of a person.

The Akh was also the aspect of the soul which could reconnect through loved ones by appearing to them in their dreams.

Sahu – The Judge and Spiritual Body
The Sahu was actually a further aspect of the Akh. As soon as a soul had been deemed worthy of entering the afterlife, the Sahu would separate from all other forms of the soul. Much like some modern ideas about ghosts, the Sahu was said to haunt those who had wronged a person in life and protect those who the soul had loved. Just as the Akh could appear in a person’s dreams, the Sahu could appear to a person. 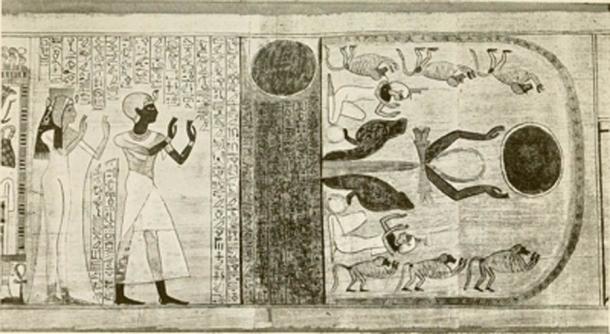 t was often considered a vengeful spirit and could be blamed for any ill fortunes. There is even an example from the Middle Kingdom of a letter left by a widower in the tomb of his late wife begging her Sahu to stop haunting him.

Sechem or Sekhem – Life Energy
The Sekhem was another element of the Akh. Not much is known about the Sekhem, but it was considered a kind of life energy of the soul. The Sekhem was present in the afterlife after judgement had been passed and the soul was considered worthy.

In the Book of the Dead the Sekhem is described as a power and the place in which the gods Horus and Osiris live in the underworld.

The Complexity of the Soul
The way ancient Egyptians divided the soul is indicative of how important it was to them. It was clearly something which had been thought about in a tremendous amount of detail, and it was the crux of their beliefs about the afterlife and how a person could reach it.

The nine aspects of the soul have influenced many other parts of Egyptian culture too. From the violent removal of names to destroy the Ren to the creation of texts such as the Book of the Dead , the soul was pivotal to much of the culture and society of ancient Egypt.

Without this complicated belief system many of the artifacts which have become iconic and world-renowned elements of ancient Egyptian culture would not have been developed, and the fascinating world which has captured many a modern imagination may have left very different treasures behind.