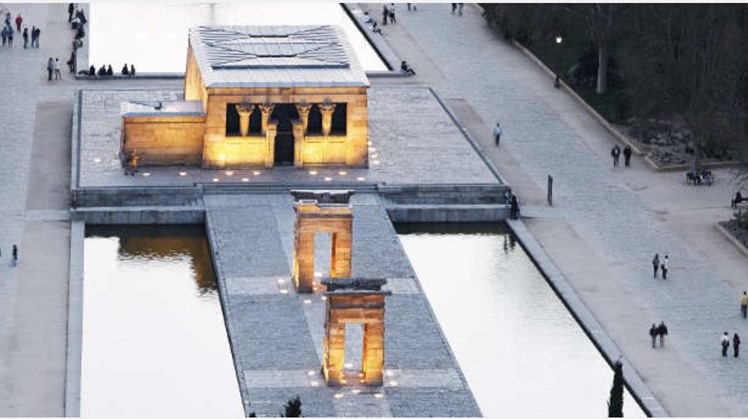 Wed, Jan. 18, 2023
Berlin, Paris, New York and London, all these countries and others are adorned with many ancient Egyptian antiquities, some of which were forcibly removed under the British occupation of Egypt, and others that a number of Egyptian leaders, kings and presidents donated some Egyptian antiquities, and others that came out with the division system under excavation laws, and for this we review A series of those monuments that are located outside the country, and during the next lines we review one of the important and unique temples that are found in Madrid.
Our appointment today is with the Temple of Debod, which was built for the idols of Amun and Isis, on the island of Philae, in the second year BC, which the Egyptian government gifted to Spain in 1968.
And about the temple, the great archaeologist, Dr. Zahi Hawass, says that the story began in 1959 when the late Dr. Tharwat Okasha, then Minister of Culture of Egypt, led the idea of saving the Nubian temples before they sank after the completion of the construction of the High Dam, and he was able to convince President Gamal Abdel Nasser of the idea and that there is a necessity For the participation of the international community in this rescue, and Egypt was able to convince UNESCO to adopt the project to save the Nubian temples.
The temple in Madrid

Dr. Zahi Hawass added, and from this decisive historical standpoint at that time, President Gamal Abdel Nasser made his famous saying, "The antiquities of Egypt do not belong only to Egypt, but to the whole world." The committees continued to search for ways to save in 1963 AD, and the rescue operation was not limited to Abu Simbel temples only, but included all Nuba temples.
Dr. Zahi Hawass indicated that rescue operations began under the supervision of UNESCO, and this international cooperation was a sign that the whole world knew the importance of Egyptian antiquities, and September 22, 1968 was one of the most important days in the history of Egypt's antiquities, as the rescue of Egyptian antiquities was celebrated thanks to the cooperation of the international community. UNESCO and the Ministry of Culture found it necessary to thank these countries for their great contribution to that rescue. Therefore, the Egyptian government agreed to gift these countries small parts of temples that became ambassadors for Egypt in the cities of these important countries.
As for the history of the temple, the temple was built 15 km south of the city of Aswan in southern Egypt near the first cataract of the Nile in the Daboud region on the western bank of Lake Nasser, and the temple was built for the god Isis on the island of Philae. A small temple was worshiped and dedicated to the god Amun. During the reign of Ptolemy VI, Ptolemy VIII, and Ptolemy XII in the Ptolemaic era, the room was expanded on its four sides to become a small temple with an area of 12 meters, and it was dedicated to the goddess Isis in Philae. The Roman emperors Augustus Caesar and Tiberius completed the decoration of the temple.