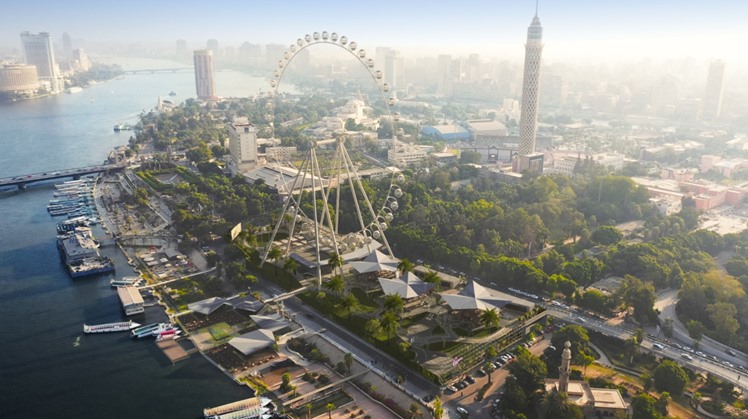 Sun, Jan. 10, 2021
In the last few hours, social media pioneers attracted the circulating photos of the largest tourist wheel in the center of Cairo in the Obelisk Park area overlooking the Nile.

Many have discussed the promotional photos of the project amid questions about the truth of the matter, at a time when some believe that it is an excellent idea for tourism promotion and an attempt to see the landmarks of Cairo more clearly from the highest point that can be reached.

Details of the scroll wheel project

One of the tourism companies announced the establishment of the Ferris wheel project under the name of Ain Cairo, revealing that it will be the largest in Africa, with a height of 120 meters, and will be established in Zamalek, overlooking the Nile.

The company revealed an increase in the green area of ​​the Obelisk Park on which the project is located, while preserving the survival of all trees and palms in it without demolition, in addition to coordinating with the Traffic Department to not cause any traffic defects in the area.

Officials of the executing company said in press statements that the rotating wheel will be a watch tower through dozens of cabins through which the landmarks of Cairo can be clearly seen from high heights such as the Citadel, Cairo Tower, the pyramids and the banks of the Nile, and with it that area will turn into an integrated tourist destination.

5 basic information about the scroll wheel

The spinning wheel is a global project that is characterized by the largest tourist cities in the world, the most important of which are London, Dubai, Singapore and Las Vegas

- There are 32 secured cabins on the wheel at heights ranging from 50 to 120 meters. You can see all the landmarks of Cairo from the top

The spinning wheel site is in the middle of Khedivial Cairo, Zamalek Island, and the Opera District, facing the Cairo Tower

Providing river transport service for the project, and establishing an attached garage with a capacity for 500 cars, according to statements by sources at the Ministry of Tourism and Antiquities