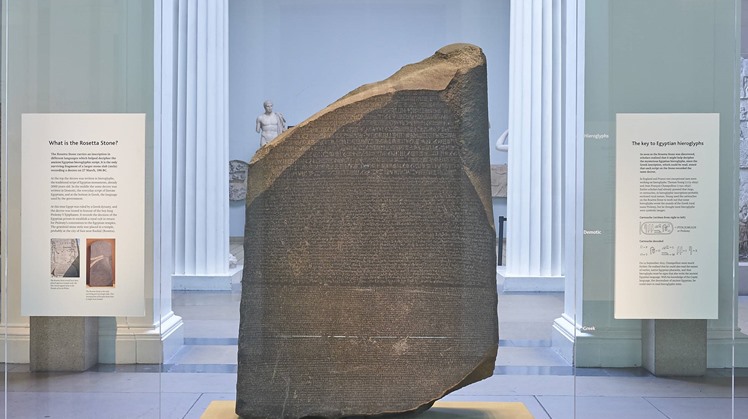 In the following lines ET reviews the details of the story.

The Rosetta Stone was discovered by the French expedition in 1799 AD. It was discovered by a French officer named Bouchard on July 19, 1799. The stone depicted inscriptions of demotic and Greek hieroglyphic texts.

The stone was called the Rosetta Stone because it was discovered in the city of Rosetta, which lies on the mouth of the Nile branch in the Mediterranean. It is a royal decree issued in the city of Memphis by priests to Ptolemy V.

Egyptologist Jean-Francois Champollion was able to decipher the ancient Egyptian hieroglyphs through the oval shapes found in the hieroglyphic text, which are known as Kharratis and include the names of kings and queens.

He was able to compare these names with the Greek text to distinguish the name of Ptolemy and Cleopatra. It was this episode that led to the decipherment of the hieroglyphic language.

The stone represents a letter of thanks and gratitude from a group of the priests of the city of Memphis to King Ptolemy V for exempting the temples from paying some fees. It was written in 196 BC.

The stone is 113 centimeters in height, 75 centimeters wide and 27.5 inches in diameter. It is inscribed with three of the ancient languages, which are the hieroglyphic language, the Demotic or Coptic language, and the Greek language.

The Rosetta Stone is currently housed in the British Museum, after the British seized it in 1801 from the French campaign.

Some may wonder why the stone was inscribed with three languages. The answer is the hieroglyphs were used because the priests at that time still used it, while most of the public used the demotic language; therefore, writing on the stone was done in three languages so that the king and the common people could read it.