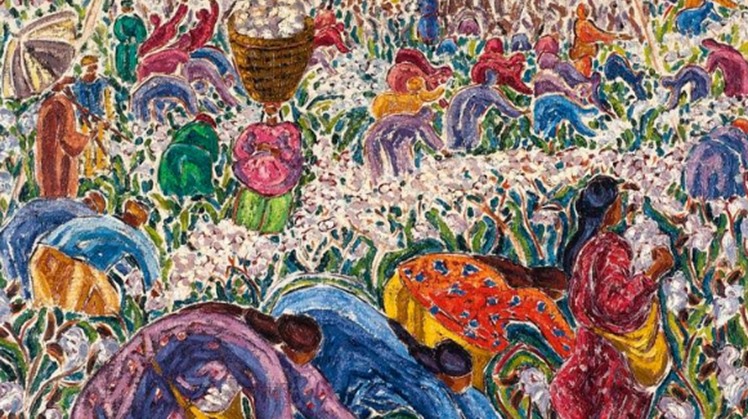 Mon, Jul. 20, 2020
Today, we see Ange Plato's "white gold" painting, which I created in 1960, expressing the stage "Egyptian cotton" was one of the most prominent features of Egypt, and I had previously read the notes of "Inge Plato" who was born in 1924 and tells On her personal history, which is the history of "Egypt" and the history of her awareness and revolution from the 1920s to the "1960s", where popular history is braided in formal history. Egypt faces the world in the tripartite aggression, and Egyptian women face a low perception of them.

Inge Plato begins from the end of the concept of notes as seen by Inge Plato, so the meaning of the notes has, that with the end of what is a year this conversation ends, so her notes were titled "Inge Plato's Diaries .. From Childhood to Prison", which was edited and presented by "Said Khayal", It was evident that he made a great effort in preparing them, as these notes were recordings on cassette tapes before they were emptied by Inge Plato in "Thirteen Pamphlets".

Through the notes of Inge Plato, it is possible to imagine the situation of Egyptian women, who had progressive features in the 1940s and 1950s, so that we know that the history of women in the face of external and internal colonialism is long and difficult, and among the most important things that Inge Plato experienced in her memoirs, along with art and her creative experience with her personal suffering Which is the suffering of an entire country, it came out of the framework of aristocracy that was living it, with all its will, and suffered because of the skeptical view of the rich people occupied by "public" issues and when it became part of the Egyptian women's movement and the Egyptian Communist movement and the press called it "Communist Miss" I paid the price for that From her life that became unstable, her husband was arrested and dead, and then arrested, she is in Al-Qanater prison.


Inge Plato had starting points in life and art. Despite her aristocratic upbringing, she had determined her position and realized that her place among the public and with the common people, where she described herself as a rebel since childhood, said: "From here I can decide without pride, and also without humility, that The rebellion was the attribute that accompanied my life afterward. "The notes reveal that Anji Plato rebelled against everything, starting with her personality and passing through every detail of her life.

At another stage of her life, she said, "I think, then I am," to "Descartes" is her way and the key to life, after her exit from the "Sacred Heart" school which symbolizes tyranny and tyranny and her joining the school "French Lycee" where she found "herself" and set out not It is bounded by something in its search for freedom or in achieving what you believe in.

In art, she believed in the saying of the artist Leonardo Da Vinci in which he says, "The artist who cannot pick up a person falls from the sixth floor is not an artist." So she fought until she got her right to draw in the "prison" as she painted the prisoners and embodied their suffering and the suffering of their children. Before I painted nature and used different and varied artistic styles.

As for the very important saying which Anji Plato leaned on was "necessary necessities" which is the prison statement on the basis of which Anji Plato was able to understand the "prison phase" and sympathize with the anomalous situations she saw there, reflecting her ability to assimilate to all, which reflected on her artistic spirit.