Cairo in Painting .. "Torch of Lamps" lighting Cairo at night by Ludwig Deutsch 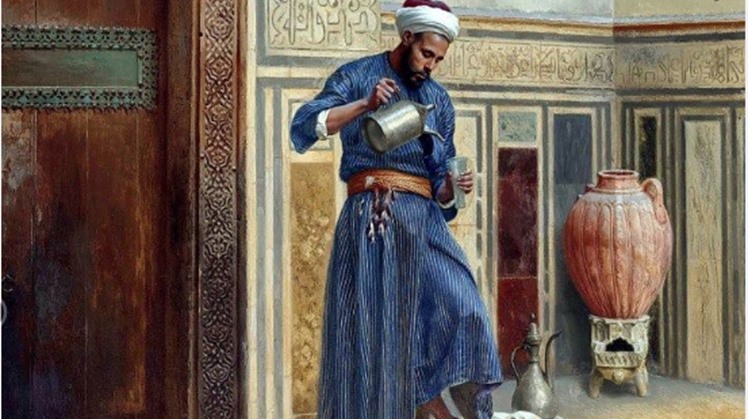 Sun, Jul. 12, 2020
Today we see the painting "Torch Lamps in the streets of Cairo" by artist Ludwig Deutsch, which he created in 1900, and represents a stage of the life of ancient Cairo at the end of the nineteenth century and the beginning of the twentieth century, when the Cairo lights were lit at night, by men designated for this task.

The painting as a whole takes us back to the old heritage streets, where the Mamluk lamps, which some of us still find in heritage mosques until now, are indicative of the city’s history and the history of its people.
And the Austrian artist Ludwig Deutsch, who lived during the period (1855-1935) and his relationship with Cairo, Nabil Ramadan wrote in the magazine Al Qafilah, saying: It was stopped in this city in particular by the Nubian soldiers who were guarding palaces and public buildings, so he painted them in many paintings, with a strong and clear focus on their pride And the strength of their structures and the pomp of their appearances and clothes .. He drew scenes from the life of the public, such as "the seller of orchids" and "chess players", and he also painted special occasions such as "Al-Mahmal", which represents the launch of the procession of transporting the clothing of the honorable Kaaba from Cairo to Mecca.

Deutsche was satisfied in Cairo with completing the preparatory drawings on paper, to later complete the oil painting in his studio in Paris in a realistic and accurate manner until the extreme limits, making many critics assert that he was even partially dependent on the photographs, as this commitment to draw the smallest details very accurately did not It was familiar to his contemporaries, and only half a century later he appeared in "super realism" or "photorealistic realism" that appeared in America.