365 Oshabti statues ... Why are they inside a Pharaonic cemetery? 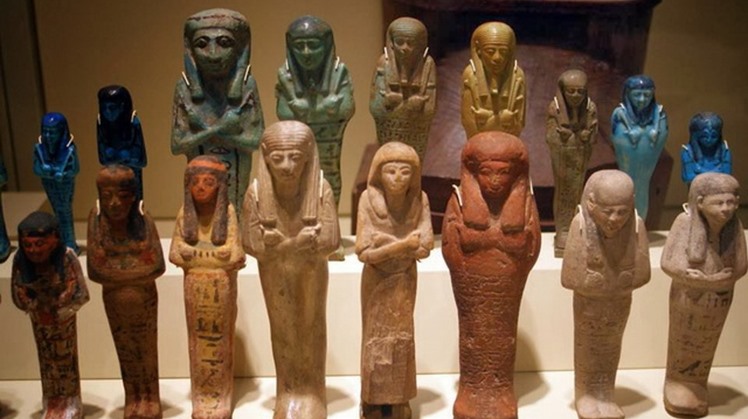 Sun, Jul. 5, 2020
The ancient Egyptians believed in another life after death, either as a resident bliss or hell, and they believed that they would work in the Hereafter in the fields of bliss, so they invented a ingenious solution to do the work in their place in Heaven, and the statues of the Ushabti were, so what is the story of the Ushabti statues?

Dr. Hussein Abdel-Basir, director of the Museum of Antiquities, the Library of Alexandria, said that the Ushabti statues took the form of a mummy, and their hands crossed on the chest and held various tools that express their function in the other world. and then.

Dr. Hussein Abdul-Basir explained, and the name of these statues came to be called "Ushabti", which means "answering", and so called "respondents", and these statues were also known as "Shawbatty" or "Shabti" since the era of the modern state. And made of many materials such as burnt clay, wood, fence, gold, silver, etc., and in the collection of King Tutankhamun of alabaster.

Hussein Abdel-Basir continued, and she was charged with carrying out the wishes of her master, answering his requests and carrying out his tasks entrusted to him in the other world, meaning that the goal of placing these statues in the cemetery was to replace the deceased in works that must be performed in the other world by himself in the fields of "Iyaro" Or the gardens of bliss, and since all the people knew neither agriculture nor tillage, these statues performed on behalf of the deceased the work related to agriculture such as digging canals and plowing agricultural land or transporting sand from one bank to another.

He drew, was writing on these statues a part of the sixth chapter of the Book of the Dead, and represents the Munajat of the deceased to the Shahabti so that he assigns him to perform the tasks entrusted to him, and in it he says: "If I called to perform one of the tasks entrusted to you, say, I am, I am present to see the land, cultivate the field and transport Sand from east to west. "

The numbers of those statues in the era of the middle state were one or two statues in the cemetery, and the numbers of these statues began to increase until the number in the era of the modern state reached 365, i.e. by the number of days of the year, and each of them served for one day of the year instead of the deceased, In a later period, thirty-six statues were added to represent its supervisors, bringing the total number of statues to 401 supervisors, and each supervisor was following ten of the working Ashwabtis, and the supervisors were depicted in living clothes to distinguish them from the workers. As for the statues of the workers, they were often provided with tools of their business, such as chains, bags, and hunting tools, and some were without tools.

Dr. Hussein Abdel-Basir added, the groups of Ushabti statues were kept inside wooden boxes to protect them, and these statues were often placed in the cemetery in separate wooden boxes or on the ground around the sarcophagus or in bowls a little bit, and in the Ramesside period they were placed in pottery vessels with the head of a jackal as a symbol For the god Anubis, the god of mummification, in the late ages it was placed in a box whose surface was decorated with inscriptions and religious charms, and in the group of Tutankhamun the number of statues reached 420 statues, and the number reached 700 statues in one cemetery of the late era, that is the genius of the ancient Egyptians in creativity Amazing solutions to some of the problems they were facing in the other world. This is Egypt, which taught the world.