What has been accomplished in the restoration of King Tutankhamun's sarcophagus in the Great Museum? 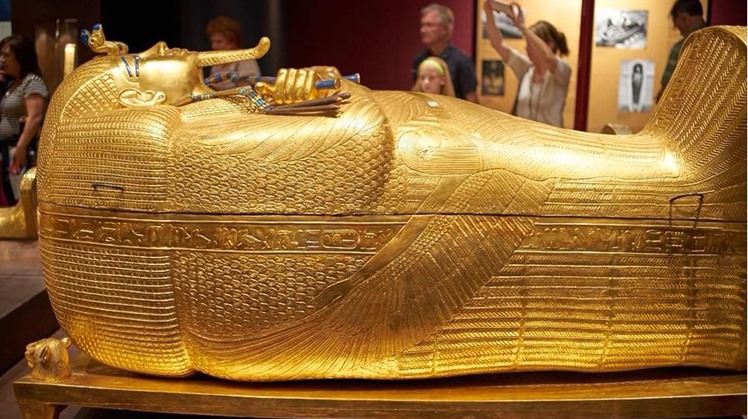 Tue, Jun. 30, 2020
The restoration of King Tutankhamun's sarcophagus, which was transported from Luxor to the restoration center of the Grand Egyptian Museum, as a prelude to his exhibition with the pieces and possessions of the Pharaoh king in full at the moment the museum opened to the public, was completed around 95 % Of the restoration of the sarcophagus, according to a number of museum restorers.

The sarcophagus is one of the three sarcophagi of the young king taking the form of the king in the Osirian position, which was discovered in his burial chamber in 1922, indicating that the outer sarcophagus is made of gilded wood, the king is represented in the form of idol Ozir, and the hands are covered with gold foil and crossed on the chest Holding the royal emblems inlaid with blue and red glass dough, indicating in this regard the dimensions of the coffin. It is 223.5 cm long, 86.8 cm wide, 105.5 cm high, and the coffin has silver handles that were used to move the lid.

The coffin was placed after a move from the Al-Aqarfi, the restoration center of the Grand Museum inside a sterilization tent, and pumping nitrogen gas inside the tent, so that there was no oxygen inside the tent, which would suffocate and eliminate the insect injury to the coffin, and after that the treatment journey started, which includes mechanical and chemical cleaning, And fixing and strengthening the weak crusts and cracks using the appropriate materials, after which the comprehensive strengthening of the coffin was made.