"On the banks of the Nile," A painting by Italian artist Hermann David Corodi 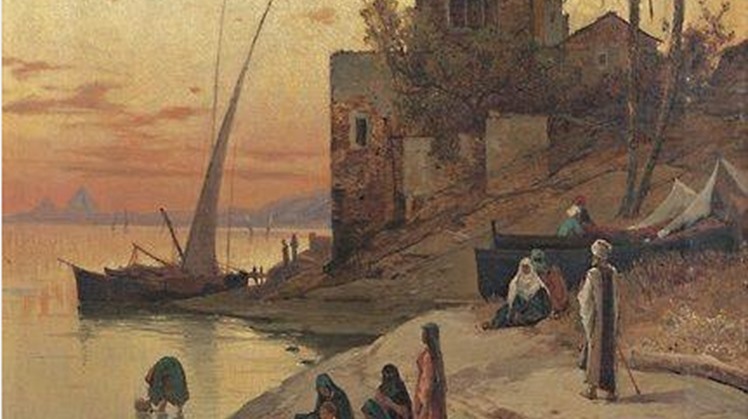 Mon, Jun. 29, 2020
Today we see a painting "On the banks of the Nile" by the Italian artist Hermann David Salomon Corodi, who lived between (1844-1905), and he was fond of Egypt that he visited and transferred much of her life to his paintings and of course the "Nile River" and the life it evokes.

The first thing that comes to our minds when watching the painting is that, despite the large number of paintings created by orientalists on the Nile in Egypt, each painting differs from the other, each artist saw something that the other had not seen, and they treated the river as a living being with status and conditions.

In the painting we see a mosque and we see men, women and children who are seen today from the banks of the river, the sun has almost disappeared, and the gray is spreading waiting for the night, and the people of the villages who live near the river know that this hour is "dramatic" in which a strange feeling of losing something appears.
The Italian Hermann David Salmon Corodi lived between the years (1844-1905) and lived for many years in Rome and "studied at the Academy of St. Luke under the supervision of his father Salomon Corodi and went to Paris 1872.


Hermann David Salmon Corodi created paintings for the British royal family, knew most of the European monarchs at the time, also established friendship with Queen Victoria, and traveled extensively in the Far East, including Egypt, Syria, Cyprus and Istanbul, all of which appeared in many From his paintings, he died in Rome on January 30, 1905.

"Hermann" created many paintings on Egypt, including the market one that was sold in 2017 at Christie's for 47,500 pounds.

The works of Hermann David Salmon Corodi are found in the Frye Art Museum in Seattle, Washington, the Dahesh Art Museum in New York, and the Rome Museum in Trastevere.