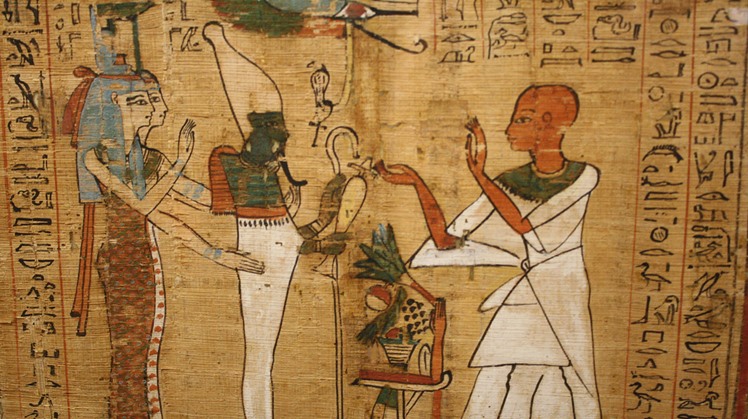 Wed, Jun. 17, 2020
Suicide is the act that deliberately causes a person to kill himself, and suicide is often committed due to despair, which is often attributed to a psychological disorder such as "depression, depressive mania, schizophrenia, alcoholism or drug use", and stress factors such as financial difficulties or often Problems in personal relations play a role in that, and a case of controversy recently flared up after the suicide of activist Sarah Hegazy in Canada, under mysterious circumstances, but what we are reviewing in the coming lines is whether the ancient Egyptian civilization knew of suicide?

Dr. Hussein Abdel-Basir, Director of the Antiquities Museum at the Alexandria Library, said that there are no archaeological evidence and evidence of suicides in the ancient Egyptian civilization, but there is a literary text during the era of the ancient Egyptian civilization entitled "Desperate from Life", which is one of the beautiful and important literary texts that It came to us from ancient Egypt, talking about despair and self-persuasion for suicide, which may indicate that there were indeed suicides at the time, but without evidence or evidence that enriched it.

Dr. Hussein Abdel-Basir explained that the literary work is a literary dialogue that has an intellectual, religious and political significance between the hopeless of life and its spirit, and this dialogue is a description of the verbal conflict and intellectual controversy between the self represented in the individual who despaired from his life due to the spread of injustice and corruption in the world and between the spirit that seeks To persuade oneself to commit suicide, to get rid of the disadvantages of this world full of crises and chaos.

He continued, "Abdel-Basir", the social reality in which this man was living was unjust, as the conditions of the country and the economic, social and political slaves worsened, and evil and corruption spread everywhere, and the values ​​of good no longer a place for people, so security, safety and loyalty fell to the point that no longer a person is a friend Or brother or neighbor talking to him, then brothers and friends have become enemies for each other, and wealth and influence have become in the hands of the bad corrupt, so that man wanted to get rid of his life by burning himself, but his spirit opposed him and threatened him that he would abandon him in the other world.

Dr. Hussein Abdul-Basir added, but he also, through his dialogue with his soul, was keen to satisfy it and remain with him, so he took dialogue with him, and he engaged in dialogue with him and took his choice between contentment with reality and life together, or contentment with death and taking it, and stopped talking and refrained from discussing it, but soon returned until Thinking about what she invited him and he intends to move her and her into the world of the afterlife, and he began to draw her into the conversation in the hope that she would encourage him and help him in making a specific decision, and I witness to it a group of people's imaginations, and the spirit made anger once again, and she answered and reproached him: "The six young men lived life from Before, what did she achieve? "Then I told him the story of a man who lost his wife and children as a result of a hurricane that threw them into a lake teeming with crocodiles in the darkness of the night, and the spirit, through the narration of this story and another that followed, aimed to convince its owner that if others contemplated his scandal, he entered With her in another controversy about the value of life that you invite him to accept after he lost the dignity, trust and hope in people and organized his answer through four prose poems.

Papyrus despair of life
He talked about death in which he is saved from his tragedy, and he affirmed his belief in life after death and his belief in reward and punishment and the justice of the gods in it, and he said to her: "And here is the truth ... the truth whoever connects to the other world will be a deity who will live in it, and evil will return to those who have come. And here is the truth from Arriving there will be a world of secrets and all things. "

Dr. Hussein Abdel-Basir notes, thus the rhetorical papyrus ended, and she was more informed than this, and this desperate was living in his struggle with his soul, and from that papyrus it is clear that the narrative style or context and public order through which the ancient Egyptian storyteller was able to draw and put the main elements of the story, especially Time, place, and movement of people, which helped the dramatic plot, which it bears a diversity of events and situations within the framework of stories, and maintained vitality, flow and follow the story.

As for suicide already, there is the text of the famous judicial papyrus of Turin, which talks about the conspiracy of the harem against the life of King Ramses III, and the conspiracy was exposed, and it was investigated by order of the pharaoh, and the court ruled the defendants with rulings ranging from execution, suicide, flogging, imprisonment, severing of the nose, anaphylaxis and innocence, each according to For his role and crime in this shameful conspiracy, that is the pharaonic Egypt, dazzled by its literary, intellectual and legal riches, which taught civilizations and inspired humanity.