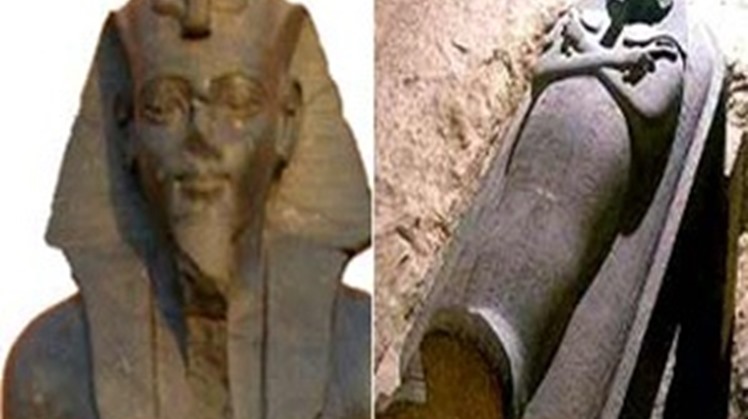 The book, "The Pharaohs Warriors ... Diplomats and Military", says by Dr. Hussein Abd Al-Basir, that Merneptah ruled for about ten years, and his reign was documented in three great inscriptions: the first is about eighty lines on a plaque in the Temple of God Amun in Karnak, and the second is a plaque With 35 lines from the Atrib region, or Penha, in the delta, the third is the great triumph plaque found by the famous British archaeologist Sir William Flinders Petrie in 1896 in the funerary temple of King Merneptah in Thebes or Luxor, consisting of 28 lines. The three panels refer to the campaigns of Merenptah the army and complement each other.

In the last years of King Ramesses II's reign, peace and tranquility prevailed on the Egyptian borders and between the countries affiliated with Egypt, but times have now changed during the reign of Pharaoh Merneptah. A rebellion flared in southern Syria and soon it was controlled by the powerful pharaoh, and the ally of the Hittite king of Egypt was attacked in his northern possessions, and a famine occurred in his land, as a result of the lack of agricultural crops, so the Egyptian king sent Merneptah grain to him, because Egypt was the basket of crops for the countries of the Near East The old, as the biblical story states.

The book “The Pharaohs of Warriors” explained that there was instability on Egypt’s western borders with the Libyans who had spread in the Egyptian Delta in the fifth year of the rule of King Merneptah, and they tried to invade Egypt and cause a revolution in Nubia and the oases of the Western Egyptian desert, so King Mernbatag made a quick move and attack Shadid eliminated them and slaughtered more than six thousand people.

Dr. Hussein Abdel-Basir continued, and Merneptah subjugated the Nubians after the elimination of the Libyans, and despite the growing age of Merneptah, he never tolerated defending Egypt, securing its borders, and harshly defeating its enemies and making them a lesson to whoever is considered.

The book "The Pharaohs of Warriors" indicated that, on the board of the victory of the Great Merneptah, the victorious king Merneptah wrote that he was proud to eliminate all enemies, and among what was written on that plaque, the only remembrance of Israel came in all ancient Egyptian antiquities and he said: Its seed disappeared, and Palestine became a widow of Egypt. "Here, writing was portrayed as a tribe and not as a country with a specific geographical area as most of the country is one of Egypt's traditional enemies. This made some believe that King Merneptah was the pharaoh of the Exodus who, during the reign of the Israelites, came out of the blessed land of Egypt. This matter is still a matter of debate among scholars and has not been resolved yet.

Merneptah, a great Egyptian king, is the best successor to the best of his great predecessors: his great father Ramses II, the great grandfather of King Seti the First, the great warrior, and his great-grandfather, King Ramesses the First. These are offspring from each other, only concerned with the renaissance of Egypt and its glory and raising its head high among the nations.