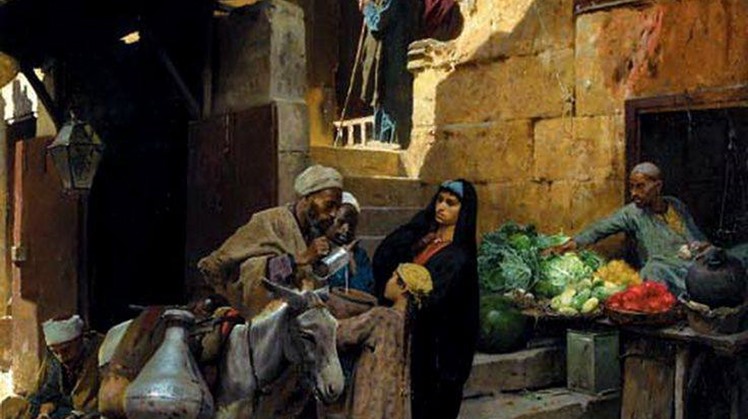 Wed, Jun. 10, 2020
We are watching the painting "On the Market", which was invented by the Austrian artist Charles Felda in 1892 from inside one of Cairo's distinctive markets for its privacy, so that after all the years that passed on the plate, we get to know everything in it easily.

It seems that "Charles Felda" who lived between the years (1854-1907) was fond of the popular life in Cairo, and here he presents four scenes in one painting, which together constitute a kind of movement inside the market that is not based on direct unity, each one is busy What he sells or buys, but there is a general unit that is seen by anyone who looks completely at the event.
Inside the market

The first scene: The man who sells milk and a girl buys from him while a woman stands watching what the man puts in the pot, and there is another man looking but it seems that he will not buy is only watching what is happening, and in the scene there is a gray "donkey" is the true hero of the scene at the level of perfection Artistic, it is drawn with a picture approaching the truth.

And the second scene, the vegetable seller, whose goods we are seeing in front of him waiting for his customers, while he entertains himself by cleaning his "vegetables", which look good from tomatoes, cabbage and potatoes.
And the third scene, a man sitting behind the milk seller, who is clearly a cobbler, sits at the entrance to a small smoke, waiting for his customers or those forced by circumstances to search for him in the market.
The fourth scene is located at the top of the small staircase, which seems to reach us to an "agency".

In the painting, we can reflect on light and shade. Charles Vilda made the best use of them. We have the sun with its full brightness illuminating almost half of the painting, while its effect is only what we find on the rest of the painting, and on the ground, which reveals the effect of movement in a popular market.