Learn about the 12 most famous pharaonic "medical" papyrus ... gynecology and most prominent magic amulets 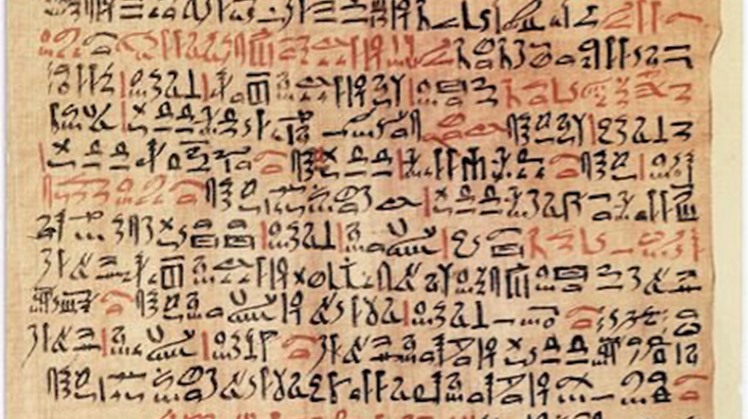 Wed, May. 27, 2020
It is known scientifically that the ancient Egyptians were the first to diagnose pregnancy and sex of the fetus 4000 years ago, and this is evident in the Berlin Papyrus, which is a papyrus bearing No. 3038 The Berlin Medical Papyrus preserved in the Berlin Museum, but it is not the only medical papyrus in Egyptian history, there are other papyri we will get to know Mentioned by the book "History of Drugs and Treatment" written by Saber Jabra:

Berlin Papyrus
1- The Ebers Papyrus: the longest and most famous medical historical document, found in 1861 in a kind condition, bought by the world in 1872 AD and named after him, now kept at the University of Leipzig, contains many medical tickets and some magic spells, it is believed that this medical document The ancient Egyptian was written at the beginning of the family 18, it is almost surmised that it was copied from an ancient manuscript, printed by George Ebers in two volumes in 1875.
This papyrus was originally written in hieratic and was very clear, the subjects heads and the like were written in red ink.


The papyrus is 20.23 meters long, the texts are divided into 108 columns, each between 20 and 22 lines.
The papyrus was found by an Egyptian farmer in the city of Luxor, buried in some coffins of mummies and placed in a cupboard of metal, which is one file of the papyrus, and one of the best types of papyrus industry. Papyrus contains a wide range of recipes for many diseases, this papyrus is still a wide field of scientific research, which may take decades.

2- Hearst Papyrus: This papyrus was found in Deir Al-Balas from Upper Egypt in 1899 AD, and is now preserved in the California Museum, and the outer layers of this papyrus file were worn out, and the inner layers were in good condition, and the history of this papyrus dates back to after the papyrus Ypres, as its writing shows, dates from the ninth year of the reign of King Amenophis I.


3 - The Edwin Smith Surgical Papyrus: preserved, translated, and commented by the public, Most of them for the treatment of surgical cases, as contained in some magic spells, this document revealed to us the extent of the mighty human mind, as He has begun to look to the secrets of the human body, as we see the extent of the arrangement reached by the ancient Egyptians in the study of surgical cases as a detection and diagnosis and description of the drug and how it is made, and the way it is used.


5- The Berlin Medical Papyrus No. 3038: preserved in the Berlin Museum, much like the Ebers and Hurst Papyrus.

6 - Kahûn Papyrus Papyrus: Found in al-Lahun from the works of the Fayyum Directorate in 1889 AD, it is considered the oldest medical papyrus dating to the era of the middle state between the two families 12 and 13, and it is a papyrus for gynecology, and has many recipes that are similar to what came in the Ebers papyrus And Edwin Smith, which indicates that these two papyri have taken many of the previous papyri in historical times, as this papyrus contains many magic prescriptions.

7- The London Medical Papyrus No. 10059: Written without care, dating back to the end of family 19, it is a magic medical papyrus.

And the Chester Homecoming Papyrus No. 10, i.e. the first, all that came in it about recipes for sexual enhancement, and the papyrus 15 and 18 are medicine and magic.

10 - Gol enishchef Papyrus: It dates back to the Greek period about the third century AD, and it is for gynecology.

11- Cattawi Papyrus: A Greek surgical papyrus dating back to the Greek era, around the third century A.D.

12- Coptic Papyri: These are papyri or portions of books on the parchima found in various places in Egypt, with many prescriptions, and they give us an idea of ​​what medicine has reached in the three Coptic eras, namely: the Greek Coptic era, the Coptic Christian era, and the Coptic era Al-Arabi, all written in the Coptic language, and the most important of these papyri or manuscripts are:

(A) The Mashaykh papyrus: It is one of the most important references in the science of drugs and therapy in the Coptic ages. 27 centimeters, totaling 240 lines, has 237 tickets, all comparisons indicate that it was written between the ninth and tenth centuries CE. Papyrus in its entirety is similar to many pharaonic papyri, above that it contained much of what was affected by the Greek civilization, as was also affected by Arab civilization, so it used many of the names of Arab medicines. Translated by scholar Emil Shasinah and commented on it.
(B) His medical paper: It is from the group of medical papers preserved in the Vatican, and it consists of two parchima papers consisting of four pages, and it contains 45 tickets for skin diseases, which is part of a book containing 245 pages, and 2800 tickets, written in the Coptic Sa’id language And he says in one of his tickets that he is translated from the medical paper that was kept in the library of Imhotep in Memphis, and this book is characterized by the apparent influence of Christianity in it, as the names of Egyptian gods in amulets and spells have changed in the names of the Christian angels.