Eras of Weak pharaohs: Samandas, Tutu Amani and others 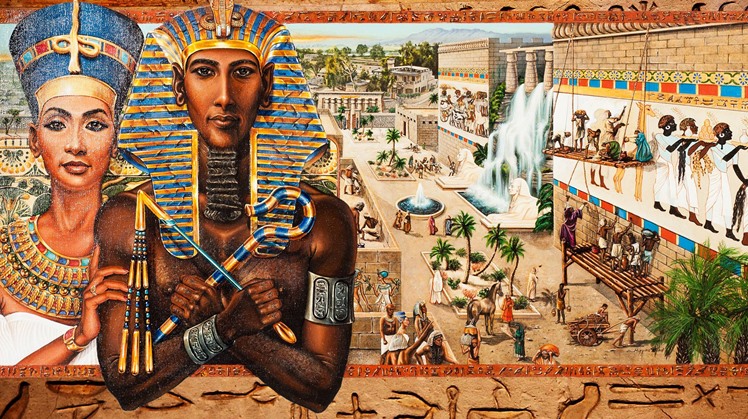 Wed, May. 27, 2020
Egyptian history is filled with stories about the rulers who ruled Egypt through the different ages, some of whom were ruling with an iron fist and working to expand the borders of Egypt and the formation of a strong Egyptian army, and fought the military battles that helped form the Egyptian Empire, and some of them were martyred on the battlefield, but also there is Powerful rulers, we find that in a period of Egypt some of the weak ruled.

Dr. Hussein Abdel-Basir, director of the Museum of Antiquities of the Bibliotheca Alexandrina, says that Egypt ruled pharaohs of bone, but that some of them are weak, and among the most famous of these weak pharaohs is "Baby II", who ruled at the end of the sixth family at the end of the era of the old state.

And the ancient Egyptian historian Maniton Samanoudi mentioned that he reached the throne at a very young age, as he was about six years old, and that he ruled about 94 years, and that his mother was the guardian of him, as was his uncle the Prince of Upper Egypt and also the minister "Jaou" who has the upper hand in discharging The affairs of the country, and the reign of Baby II, the longest reign of a monarch in history, is about 94 years, although this number is disputed by some Egyptologists.

As for the second king, Dr. Hussein Abdel-Basir explained that he was Ramesses XI, the last king of the twentieth family and the era of the modern state.

In his era, Egypt was characterized by insecurity and political and economic instability, and this was due to Egypt's collapsing internal situation, the King's negligence in defending it, and his inability to carry out the functions of the ruling pharaoh to establish security and safety in the country and among the people.

In the late era of Ramesses XI, one of the priests took advantage of the opportunity, called "Herihor," the chief priest of the god Amon in Thebes in the south, and ruled by virtue of Upper Egypt out of the control of King Ramses XI.

Dr. Hussein Abdul-Basir added, as was one of the weak rulers, King Samandus, who is the founder of the twenty-first family and ascended the throne after the burial of King Ramesses XI, and in a situation that does not happen frequently, King Samandas in his reign with the period of the great priest of Amun called Herihor in Tayba In the south, this is one of the few times that Egypt ruled the priests, or what is known as "theocratic rule", that is, "the rule of clergy", and that type of rule was not known in ancient Egypt, due to the weakness of King Simandus, who could not Control of the south of the country and the south remained in the grip of the priests of God Amon, and there were two rulers in the country: a ruler in the north in Tanis, King Samandas, and a ruler in the south in Thebes Kabir, priests of the god Amon Harihor.

The director of the Museum of Archeology of the Bibliotheca Alexandrina pointed out that the list of those rulers includes King Tutot Amanihue, the king of Cush, the Pharaoh of Egypt, and the last king in the twenty-fifth Cushite family.

After the Assyrians departed from Egypt and installed them to the pharaoh of Nechau I, the king of the twenty-sixth dynasty of the Sawi family in the Egyptian Delta, the king of Tenot walked the aspirations of his armies invading all of Egypt until the eternal capital, exile in desire for revenge against the Assyrians, and in response to that, the Assyrian armies returned to Egypt once Others, and it succeeded in driving the Kushites to the south, and from that date until his death, King Tutot Amani ruled only the Kingdom of Kush, from the city of Karma in the south.

He pointed out that King Bismatik III, the last king of the 26th dynasty of the Sawi family before the first Persian occupation of Egypt, ruled Egypt for only several months before King Qambiz, king of the Persians, defeated him, and he was carried to the Persian capital in Sousse, bound by handcuffs and chains, where he was executed later, as one of the accounts recalls The historical end is over.