The most famous myth of creation ... "Theory of On" among the ancient Egyptians "the holy ninth" 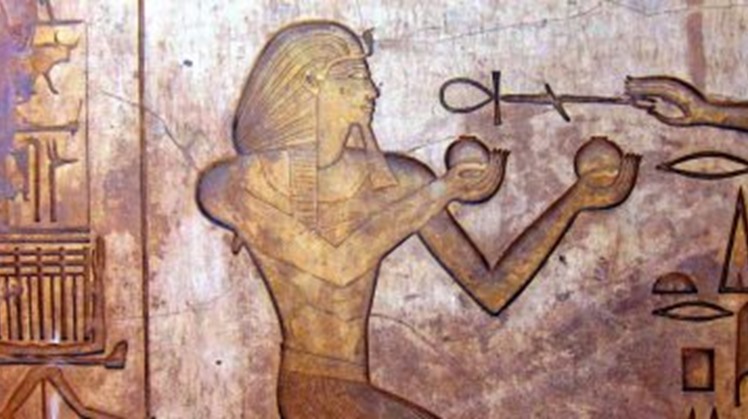 Sun, May. 17, 2020
When people found themselves on earth, they sought to know, in different ways, some of whom had learned through the messengers of God, and some of them had learned through observation and contemplation. The latter had been right and wrong, including the “en” theory in ancient Egyptian civilization:

This theory appeared in the school of the city of On - Heliopolis - (the current Ain Shams) and was known as the theory of the ninth (i.e. includes nine deities) and says: The world before the existence of the gods was an eternal and endless ocean of water called "Noun", and from this ocean emerged The spirit of the "god Atom" (Atum of Ra Khubar) is the sun god in his full form who created himself himself and was settled on a hill above that water.


When he sensed loneliness, he created other companions and then pronounced from his mouth to get out the god of air "Shaw" and gods of humidity "Tefnut", then they got married and gave birth to the god of the earth "Jeb" and the gods of heaven "Nut", who in turn gave birth to four gods who are "Osir" and "Eza" And "Set" and "Nephthys", among which the famous legend took place, namely, Izza, the minister "Isis, and Osiris", and then Horus ruled the land after defeating Set in the legend, and the legend recounts that the Earth "Jeb" and the sky "Nut" were part One and "Shaw" air entered between them and separated from each other.

The Ashmunin theory is in agreement with many of the “On” school theory and differs from it in some things:
And “Ashmounians” is a city that is currently located in the same name in Minya Governorate in Upper Egypt. The Greeks have called it the name of Hermopolis. The Ashmounians school sees that the world was an eternal ocean, and it had properties from nature represented by four pairs of deities. Each pair represents a part of nature They are the (darkness), which is the husband of the gods Cook and Cooke.

And space and its like are waved and waved, and the great depth is embodied by Nunnont, and the darkness and air are represented by Amon and Amunt, and the legend says, "The god Amon moved the air and the stagnant water moved out from it. The eternal hill consisting of silt and out of the hill came out there was a cosmic egg that the heavenly goose swirled - one text says that The god Apis is the one who spawned that egg, and when the egg exploded, a great bird came out that believed to be the father of the ibis, and he is the symbol of the god Thoth, the god of wisdom. ”And another text says that whoever came out of that egg is the god Ra, and by his appearance the eight gods withdrew to the lower world, leaving the god Ra in the universe to do the job of creating humans and shades Hr universe, some scientists believe that the idea of ​​the appearance of the egg and exploded representation of the idea of ​​the Big Bang.