"Fetching Water" is a story on the riverbank by artist Leopold Carl, and the painting reflects an Egyptian village 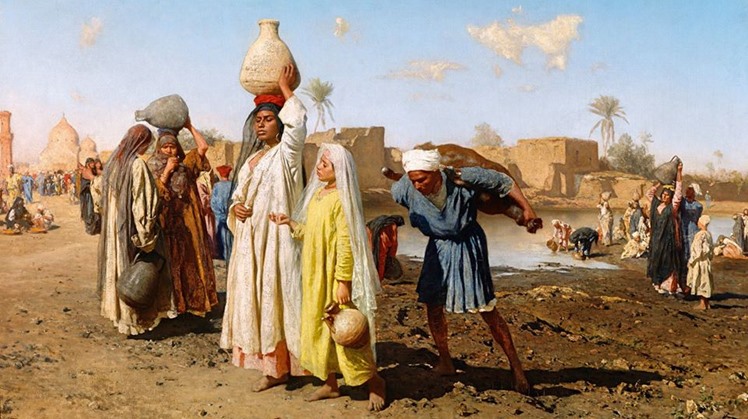 Sun, May. 17, 2020
One of the important portraits of the Egyptian character is the "Bring Water" painting by Austrian artist Leopold Karl Muller, which he created in 1880.

The painting expresses an Egyptian village at a certain moment, which is the moment of fetching water from the river, in a scene similar to the festival, where everyone stands on clay soil from the influence of the Nile, everyone is men and women in order to obtain running water, and it is noticed that the dominance, as it is clear to the women who came out To fetch water and exchange conversation between them.

It is clear that the scene and its beauty imposed itself on the artist who was searching for what deserves registration in Egyptian life, and he knew that it is a scene that is not repeated frequently in other civilizations.
"Leopold Karl Muller" was able to convey the features of the Egyptian environment, whether in the features of faces, costumes or architecture, as well as the purity of its atmosphere and beauty.
And artist Leopold Karl Muller (December 9, 1834 - August 4, 1892), an Austrian painter who was a student of the painter Karl von Blas at the Vienna Academy, was forced to support his family after the death of his father, and he worked eight years as a painter for the Figaro Vienna, and then continued his studies, then He visited Italy and also he visited Egypt repeatedly, his name became positively known through a series of scenes of his drawings from the popular life in Italy, Hungary and Egypt.