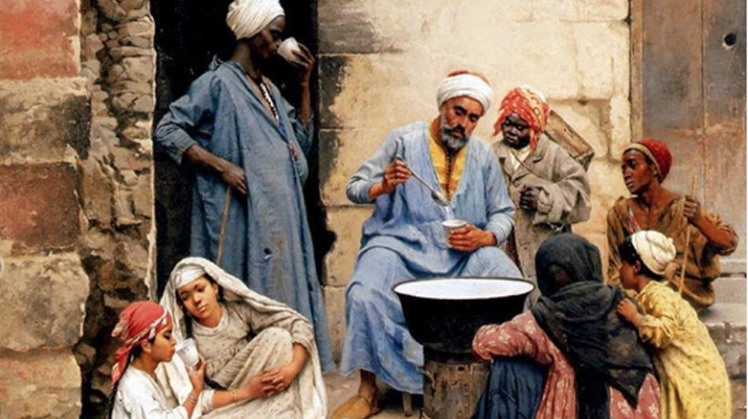 Sun, May. 10, 2020
I always like to read paintings, contemplating the faces, especially the faces of the boys, because they are usually more surprising than the rest of the details, and this is what we find in what was drawn by the Austrian orientalist Ludwig Deutsch, who lived between 1855-1935 AD, including the painting "The Orchid Seller in Cairo "1890 CE.

In the painting, attention is drawn to the "orchid" drink, so the seller takes from his container to put in the cup, so we see eyes prone to this movement as if it were the actions of magicians, and the boy with the blue robes who drinks from his cup has all his focus in what he does, and the old girl looks at her little sister who drinks her share Of "orchids" and they clearly share one cup together.

Ludwig Deutsch is concerned with the details until it was said that he used to draw the scenery on paper and then quietly work on it in his studio in order to come out with the image that satisfies him, in a manner that almost approximated the "photo-portrait" already. It contains scribes that were not overlooked by the painting in order to realize accuracy in drawing and creativity in implementation.

It is also attention to detail also the multiplicity of colors in the painting, at the same time that these multiple colors are in harmony with the general atmosphere of the carnival of work, so we notice a degree of celebration, showing all the clothes in the different painting, indicating the artist's desire to provide the greatest possible amount of pleasure in his artwork.