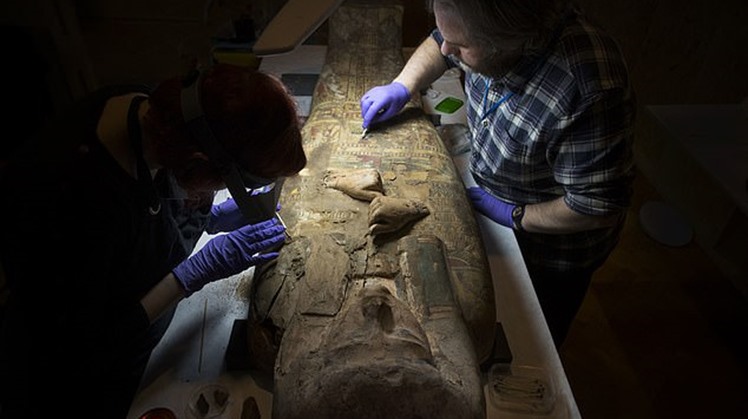 Sun, Apr. 5, 2020
Researchers have discovered paintings inside the coffin of an Egyptian mummy after it was first removed from it for more than 100 years, during restoration and maintenance by a Scottish team to preserve it, believed to be this mummy by a priest or princess of Thebes.

The 3000-year-old mummy was in a fragile state after being targeted by dangerous thieves throughout history, requiring work to ensure her condition did not deteriorate any further, before her remains were exhibited at the new City Hall Museum in Perth, Scotland.

Conservatives were surprised to find pictures of an Egyptian goddess, on both the internal and external bases of the sarcophagus, when the windings were raised, according to Russia’s website today quoting the Daily Mail, and both panels represent the Egyptian goddess known as (She of the West) or “Our Lady” West "sometimes.

"It was a big surprise that these paintings appeared," said Dr. Mark Hall, antiques officer at the Perth Museum and Art Gallery. More research will be done on the paintings to learn more about the history of the mummy, which is believed to date back to between 760 and 525 BC.

The painting on the inner base of the sarcophagus was previously hidden, which is the best preserved and the mummy appears in the fascia, looks full and wears her typical red dress.

It is worth noting that the mummy was donated to the Perth Museum, by the Alloa Society of Natural Sciences and Archeology in 1936.

The Perth Museum and Art Gallery now hopes to save "Ta-Kr-Hb" - as written in hieroglyphs on the cover of its coffin - for future generations.