The Powerful Story Of The Female Pharaoh Who Ruled Ancient Egypt 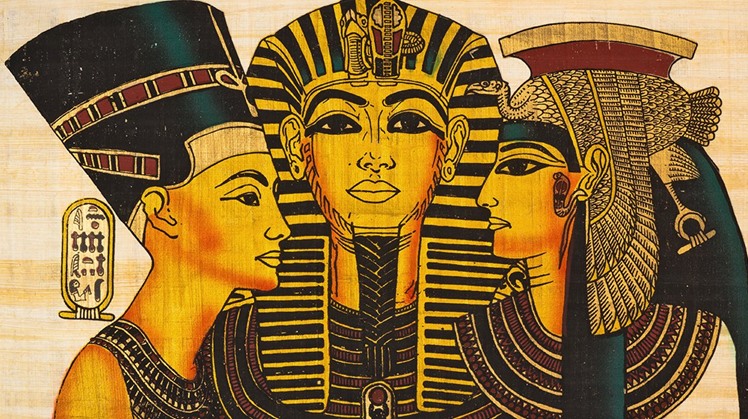 Wed, Apr. 1, 2020
In honor of Women’s History Month, we bring you Hidden #Herstories: A series of profiles on remarkable, yet under-celebrated women whose bravery, intelligence, skill, generosity and leadership allowed them to contribute significantly to their respective fields, paving the way for generations of female creators and innovators to come. Presented in partnership with Google Play, these women embody the ethos behind “Change the Game,” an initiative designed to empower women as players and creators in the realm of mobile gaming.

We all know that when women lead, we tend to hit it out of the park—but those contributions often go overlooked. While Hatshepsut was one of the most impactful rulers of ancient Egypt, her legacy was nearly lost to history.

Hatshepsut was one of a small handful of women leaders to bust up the pharaoh boys’ club. While she wasn’t ancient Egypt’s first female leader (Merneith and Sobeknefru preceded her), Hatshepsut was arguably its most influential. She reigned for two prosperous and productive decades, from around 1478—1458 BC.

After seven years as regent, Hatshepsut bucked tradition and named herself pharaoh. This bold power move is one of the reasons why Hatshepsut is remembered for being controversial. As the Ancient History Encyclopedia notes, “according to Egyptian tradition, no woman should have been able to assume the full power of pharaoh.” How’s that for bossing up?

When Thutmose III did become of age, Hatshepsut made him a military commander. She clearly had a knack for delegation, as Thutmose III excelled at his position; some scholars even dubbed him the “Napoleon of Egypt.” Under Hatshepsut’s reign, Egypt had a powerful army, successful trade deals, and major public projects in the works, including the erection of huge monuments.

Hatshepsut’s mortuary temple, a project she oversaw between the 7th and the 22nd years of her rule, is considered one of the one of the most important monuments in Egypt. Indeed, her constructions were so grand and well-executed that kings would later try to claim them as their own. (A man taking credit for the work of an ambitious woman? Never!)

But Hatshepsut kept some details of her accomplishments close to her chest. Her trading expedition to the ancient kingdom of Punt during her ninth year as Pharaoh is one of her biggest feats; Punt was rich in resources like ivory, animals, and gold. She left a detailed catalogue of the riches she found there in her temple at Deir el-Bahri, but never revealed the kingdom’s exact location. The mystery confounds Egyptologists even today.

As PBS puts it, “So elusive is the answer that, since the mid-19th century, a procession of scholars have, like erudite dart-throwers, stippled the map of the Red Sea area with their often strongly argued proposals for where Punt lay. Syria. Sinai. Southern Arabia. Eastern Sudan. Northern Ethiopia. Somalia. Kenya. Each was Punt, insists this or that Egyptologist. New papers continue to appear regularly that try to put this question to bed once and for all. So far, all have failed.”

Another thing that keeps scholars guessing about Hatshepsut is that she’s depicted in myriad ways. The female leader is sometimes shown wearing traditionally-male clothing or even having a beard. While some think this was purposefully done to make citizens think their ruler was male, other researchers maintain this was done to assert her power. The Ancient History Encyclopedia posits that “her male garb was not intended to fool the citizens into believing their pharaoh was male. Statues unequivocally portray a female whose sex, in any case, would have been obvious to any Egyptian from her name, ‘She is First Among Noble Women.’ Rather than denying her femininity, she was proclaiming that she was also a pharaoh, an office that traditionally had been held by a man.”

Hatshepsut’s penchant for building statues and temples (the most famous being a temple dedicated to herself!) is particularly significant when you consider how few women are immortalized in monuments. Of the 5,575 outdoor sculptures of historical figures in the United States, only 559 are of women. That’s a pitiful 10%! It gets worse; of the 152 national monuments like buildings and rock formations, only 3 of them are dedicated to women. Hatshepsut’s temple still stands today and is one of far too few monuments dedicated to female leaders.

But that rich legacy was very nearly erased. After her death, vandals smashed or defaced many of the artifacts depicting her likeness, attempting to leave her rule in the dustbins of history. Many scholars suggest this was under the orders of Thutmose III when he eventually rose to power in 1425 BC, as revenge for his stepmother usurping his throne. According to the BBC, Hatshepsut’s contributions “remained lost until, almost three thousand years later, modern Egyptologists reconstructed her damaged inscriptions and restored her to her rightful dynastic place.”

Fortunately for all of us, Hatshepsut’s legacy remains intact. But when archaeologists dig up the remnants of our society years from now, will they find any monuments to women leaders? They will if we build them.