Tourists have flocked in one day trip to Luxor 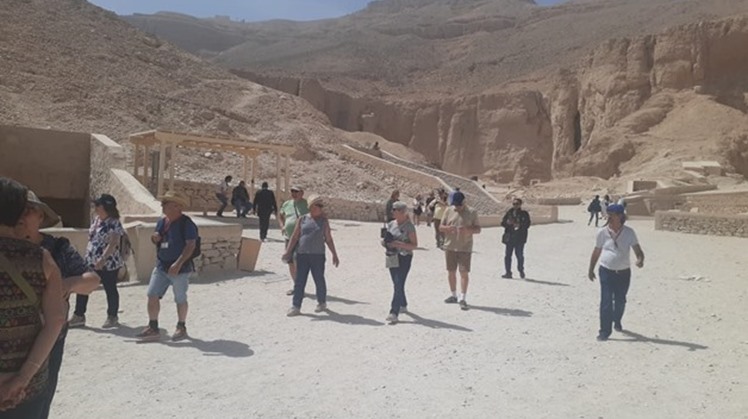 Wed, Mar. 11, 2020
Tourists have flocked on Tuesday, in one day trip to Luxor from Safga and Hurghada to enjoy visiting its different archaeological sites.

Dr.Mostafa Waziri Secretary General of the Supreme Council of Antiquities said that tourists activities are proceeding normally in Luxor, as thousands of visitors have flocked onto its different archaeological sites such as Hatshepsut’s Temple in Al-Deir Al-Bahari, the Valley of the Kings and Habu Temple on Luxor’s west bank as well as Luxor and Karnak Temples, on the east bank.

He asserted that tourists are enjoying Egypt’s unique heritage in Luxor’s bright sunny weather asserting that the number of tourists in all sites in Egypt are according to its normal record and for example the number of tourists who are visiting Deir Al-Bahari Temple and Valley of the Kings has exceeded similar number at the same time last year.


International star Jimmy Jean-Louis visited Luxor Temple on Monday, March 9 on the sidelines of his participation in the ninth edition of Luxor African Film Festival.

International star Jimmy Jean-Louis visited Luxor Temple on Monday, March 9 on the sidelines of his participation in the ninth edition of Luxor African Film Festival.

It is worth mentioning that the Pharaonic Kebbash Road is to become the longest gangway and open museum in the world.

The renovation of the Pharaonic Kebbash Road is considered a monumental moment for Luxor, as the project will bring the great road to life again.

Its new design is set to change Luxor’s position on the touristic map, as it will become the longest gangway and open museum in the world.

It is expected that the new makeover of Kebbash Road will attract tourists the world over and play a vital role in pushing the Egyptian tourism forward.

Kebbash Road will be reopened after its renovation.

During the time of the Pharaohs, the road was one of the most important, as it hosted ceremonies and festivals.

The road was opened to the public in March 2013 by the Minister of Tourism.

Although Kebbash Road is 2.7 kilometers long, a walk through it is enjoyable as there are around 1,200 statues lining one side of the road, each resembling the Sphinx (where the head is that of a ram and the body is that of a lion) and sculpted from sandstone.

This meaningful decoration is dedicated to Amun, as the head of the statues are in the form of the god’s while the rest of the statue — the body of a lion — is a means of protecting the temples from looters.