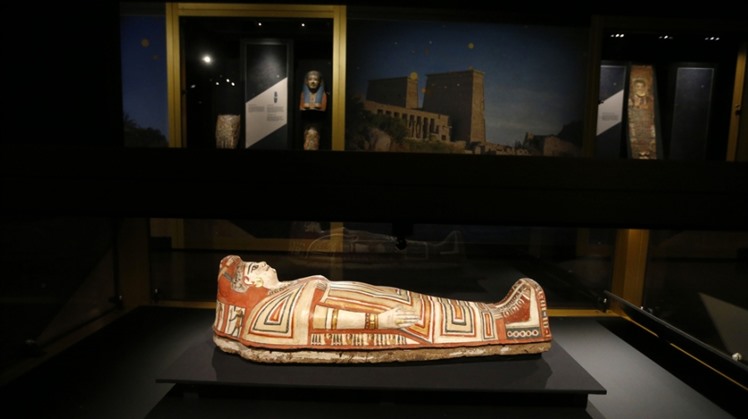 Wed, Feb. 12, 2020
Mummies have long been known for their haunting and mysterious images from a long-ago world.

A British museum with a world-renowned collection of mummies and Egyptian artifacts is taking them on the road for the first time while the museum itself undergoes a renovation. And the first stop is Buffalo.

"Golden Mummies of Egypt," which opens Saturday, offers a sophisticated and artful presentation on the fascinating burial habits of the well-to-do in ancient Egypt.

"Mummies, like dinosaurs, are a topic people are always compelled to learn about," said Marisa Wigglesworth, the Buffalo museum's president and CEO. "It's a magnificent collection, and we are very honored and proud that we built this exhibit — the first time we've done so — here at the Buffalo Museum of Science."

The exhibition, contained within several dark rooms, creates a sensory experience for the vividly decorated mummies through lighting and sound recordings. There are also three short, crisply made films.


The show takes people to the Greco-Roman Period of Egyptian history, between 300 BC and AD 300. During that period, Egypt was first ruled by Greeks that culminated with Queen Cleopatra VII. Roman emperors came next.

The elaborate preparations for the afterlife combined Egyptian, Greek and Roman ideals of eternal beauty, seen through painting, hieroglyphics and plaster masks on the wooden coffins.

"It's really a very partial view of ancient Egyptian society, but it's still one of the best and richest collections of this kind of material outside Cairo," said Campbell Price, curator of Egyptology at Manchester Museum in Manchester, England, and of the show.

The mummies were excavated from Egypt under British colonial rule from the 1880s to 1910s. Most in the exhibition were taken from a single archaeological site under the direction of archaeologist, Flinders Petrie, called by Price "the great white-bearded man of archaeology."

Flinders' team found tens of thousands of mummies, but only bothered with the "golden mummies" — the 1% or 2% of coffins painted and gilded in gold leaf.

"It represents also the colonial history of Britain, which we have been extremely uncomfortable about talking about until maybe the last five years because Flinders Petrie collected skulls and was very interested in eugenics," Price said.

Price suggested the public's fascination with mummies — stoked in no small part by Boris Karloff's starring role in "The Mummy" in 1932 and by numerous Hollywood remakes since — has to do with the West's clinical attitudes toward death and the corpse. He said there is also envy among some over the beautiful ways in which the privileged in Egyptian society hoped to join the gods in the afterlife.

"You come into a museum, you see a mummy, and in the popular imagination mummies exist with werewolves and vampires," Price said. "We cannot believe a mummy is a real thing, even though we know it from fiction. All these things add to the eternal allure of mummies."

All the mummies are intricately wrapped in linen, with no human remains on display.

Some mummies have painted portrait-like panels, which shocked people in the 1880s because painting of that quality was believed to have started in the Italian Renaissance. It's not known if the portraits were idealized images of the deceased or even created after death.

The 3- to 4-minute films conjure the heat, terrain and colors of Egypt as the camera glides across the desert with pop-up graphics.

One film explains the temples along the Nile that housed the gods in the form of statues. A second introduces the gods, including Isis and Sobek, the crocodile god. The third focuses on Petrie's excavations, touching on his disproven, racialized ideas.

Majesty of 'Golden Mummies' at Museum of Science
The films' soundtracks were recorded on the Nile and in the Egyptian desert, said Tim Pethick, CEO of Nomad Exhibitions and the show's producer.

"I think it's a bit of happenstance," Pethick said. "It looks like you're in an empty tomb and golden dust is being gently blown around the floor. That is an iconic feature of all our graphics and media. And here it is on the floor -- we couldn't have asked for anything better."

Ticket prices for the special exhibition are $5 higher than regular pricing. Tickets are $19, $16 for seniors, students, military with ID and children ages 2 to 16. Museum members pay $5.

Tickets have designated entry times due to anticipated demand. The public is encouraged to buy tickets in advance by going to sciencebuff.org. School trips will be heaviest between 10 a.m. and 1 p.m. Tuesday through Friday for those wishing to come during a less busy time.

Buffalo, it turns out, has a long history of mummified corpses coming to Buffalo, Price said.

"I was reading an account of Egyptian mummies on display in Buffalo in the 1820s, so there have been 200 years of displaying Egyptian human remains," Price said.