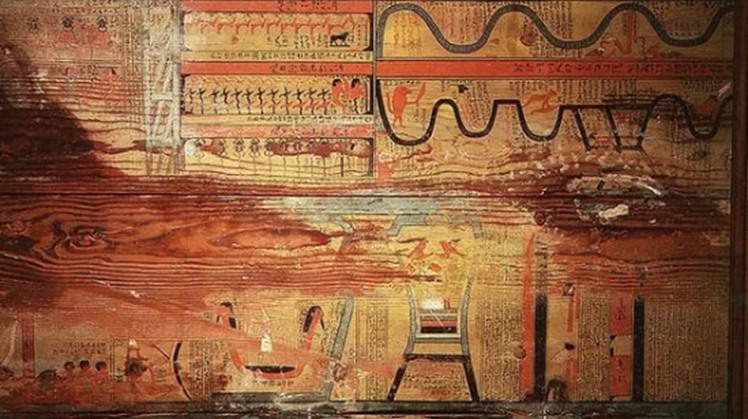 Tue, Jan. 14, 2020
Archaeological researchers have found what is believed to be the first illustrated book in history in Egypt, which is a new guide that explains the way to the world of the God of reckoning and resurrection at the pharaohs Osiris. The book's age is more than 4 thousand years old, and it may be the oldest version ever present. The book is a copy of "Book of Two Ways", or as it is known as the texts of coffins.

A term that is called more than a thousand talismans, groups of which were written on coffins during the Middle Kingdom (2055-1795 BC), and were intended to ensure survival in the afterlife. Many of these talismans are derived from the texts of the pyramids, while some of them are the origin of some talismans of the Book of the Dead that date back to the era of the modern state.

It is also known as a group of ancient Egyptian funerary texts, which began appearing on coffins at the beginning of the first decay period. These texts were derived from the texts of the pyramids that were for royal use only, where some of their words were replaced to be used by the common people, as it became in the ability of some common Egyptians to own coffins inscribed with funerary texts, meaning that the right of the afterlife is no longer limited to the pharaoh, most of These texts go back to the Middle Kingdom, and sometimes these texts were engraved on the walls of tombs, obelisks, papyri, and even on mummy masks.

According to the book "The Prophets and Sacred Books - The Religious Phenomenon - Part Three", the content of these texts is drawn from many different areas of religious life, such as myths about deities and chants, and magical sayings, as was the case with the Pyramid texts, but the texts of the coffins are not interested in melting the content in Theological theory, but its apparent character is the tendency to confirm its magic effect in the service of the dead.

Moreover, the texts of the coffins have the formula of the speaker and has been added to each text explaining the intended purpose of it, which gave this increase a title stamp for each passage, hence it is clear that these texts were put to the use of the dead in regular batches to secure the service that he needs in the life after death.

Also, these texts were drawn up for the use of commoners, and their effect was not limited to kings. Every person can turn after irrigation into irrigation or to Osiris and thereby obtain a better life in the community of deities, but this is not automatic, as was imagined for kings, but rather The dead here is to appear before the court of the dead, so the value of his life will be related to his moral behavior in his life on the ground and a standard for the judiciary’s ruling in this matter.